This church was constituted on November 6, 1960, with 114 members. Sponsored by Street Luke, the first services were held in a storefront at Lumpkin Terrace Shopping Center. Called Broadmoor at first, it was renamed Asbury after the first Bishop of American Methodism, Francis Asbury. Rev. H. B. "Doc" Underwood was the first pastor. In 1961, the first building, of brick construction, was begun and soon in use for services. Several additions were made until 1963. Located in South Columbus near Ft. Benning, it is the first Methodist church off base. In 1973, the "temporary sanctuary" was converted into a permanent sanctuary. The altar area was enlarged, carpet and pews installed, and the interior repainted. Thirteen stained glass windows were installed as memorials in 1981. One window, given by Asbury United Women, was dedicated to the wives of ministers who had served the church. All indebtedness on the church was relieved in 1981, with Bishop Joel McDavid dedicating the building in May 1982.
Sunday worship is at 9:00 a.m. with Sunday school afterward. The church also has Wednesday Bible Study, Youth Jamboree and supports a Cub Scout/Boy Scout troop. 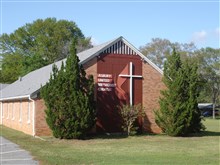