In July 2012, Edgewood UMC and Sherwood UMC merged to form Living Grace UMC. The church has a parsonage.

The beginning of Edgewood UMC starts with a lady across from the church recalling that it was the district superintendent whom she met clearing a lot of this church. Rev. Roy McTier was the district superintendent and Rev. H. D. "Doc" Underwood was the first pastor. On April 18, 1954, Edgewood was organized in a six-room dwelling on the property. The house had been adapted to use for services until the first unit was built. That unit is now called Hazen Hall. The present sanctuary was built in 1970. All structures are brick. On July 8, 1974, an arsonist set fire to the church facilities and left it heavily damaged. By January 1975 the church was completely restored with some important modifications to the educational unit.

On the lawn of Chester Murray's home, Sherwood UMC was organized on August 24, 1947, with seventeen members. Rev. W. E. Scott, the pastor of St. Paul, gave assistance to Bill Calhoun, a ministerial student, in this first period. Rev. C. E. "Ned" Steele was assigned as the first pastor in June 1948. The first unit of the building was completed June 17, 1948, with the second begun in 1949. Both were dedicated, as they were free of debt, on December 21, 1952. On April 18, 1953, a tornado destroyed one unit and seriously damaged the parsonage and the first unit. While the sanctuary roof and walls were gone, the music open on the organ and the organist's shoes still stood as she left them shortly before. The Columbus Boys’ Club served as a place of worship until the building could be replaced. In June 1954 architectural plans were approved for the permanent sanctuary and work begun. All church debts were paid and the mortgage burned on July 25, 1965. The church was dedicated by Bishop John Owen Smith. 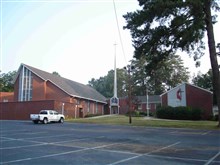