On October 12, 1804, John and Rebecca Roe deeded 2.25 acres to David Kennedy, Josiah Everette, Jarvis Jackson, Burrell Whittington and William M. Kennedy, trustees for the Methodist Episcopal Church. Rebecca Roe never signed this deed and the deed was never recorded but a meeting house was constructed on this site. The first Quarterly Conference held at New Hope Meeting House was dated August 25-27, 1815. In 1825, the trustees, David Kennedy, Sheppard Williams and Ely Kennedy, purchased a two-acre tract from the heirs of Joseph Grooms on the Milledgeville Road. A one-room meeting house was built and used for school during the week. It was replaced by a larger building in 1855 which was used until 1907. There was a cemetery adjacent to the property. In 1900, the old building was moved across the road onto a six-acre wooded lot so that the cemetery might be expanded. This land was purchased from Eli W. Hodges by Mitchell Williams, William Hagin, Benjamin R. Sharpe, George R. Hagin and William A. Hodges, Sr.  In 1876, Bishop George F. Pierce was present, James R. Ware was the pastor and John E. Sentell was the presiding elder. In 1886, a Woman's Foreign Missionary Society was organized by the pastor's wife, Mrs. T. D. Strong. Mrs. J. W. Wilson was president and Mrs. W. A. Hodges, Sr. was corresponding secretary.

In August 1904, a centennial week was observed in the 1855 building with Rev. T. J. Mims as the pastor. He was assisted by P. E. George, W. Mathews, and Rev. H. P. Myers. It was at this celebration that a decision was made to construct a new building. The old church building was sold to Bulloch County Board of Education and the first service conducted in the new sanctuary was Thanksgiving, 1907. The ceiling was tongue and groove oiled with warm linseed oil. The floors were slanted toward the pulpit. A semi-circular altar rail and carved pillars set apart the altar area. The first stained-glass windows in Bulloch County flooded the interior with many colors. The total cost was two thousand dollars.

Brooklet and New Hope were listed as half station churches in 1909, and this bond lasted until 1968 when Brooklet became a station. In 1961, an annex was added to give needed room for Sunday school and other activities. More Sunday school classes were added in 1976. Brooklet and New Hope, under the pastorate of Rev. William E. Chapple, was selected as Charge of the Year for the Statesboro District in 1963 and 1966. In 1989, funds were raised for a new addition which would include a large dining room, kitchen, storage room, restrooms and a covered portico between the new and existing building. The new building was dedicated on October 29, 1989. 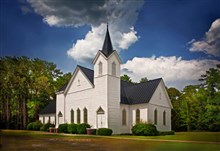