The Bethel Methodist Church was organized in 1882. Three acres of land, given by Mr. Josh Merritt in 1885, was given and it includes the ground on which the church now stands, the cemetery, and a lot of lands on which timber now grows. The names on the deed are George A. Wight, B. H. Powell, N. M. Griffin, T. H. Herring, I. J. Williams, William Powell, and Casper Walker who were trustees of the Cairo Circuit, Thomasville District at the time. The church structure, which the members built, still stands on the same spot. The cemetery was started before there was a building and the deed drawn up. Mr. Jonathan Merritt was the first person to be buried in Bethel Cemetery in November 1882. The first couple to be married in the church was Mr. William A. Bell and Miss Amalea L. Herring in 1884. Worship services were held once a month on Saturdays and Sundays. A Sunday school was organized before 1890 and continued until 1972.

In 1945, under the pastorate of Rev. Paul Barrett, the Woman's Society of Christian Service was organized with nine charter members and Mrs. Alvie Harrell serving as the first President. In 1972, this organization changed its name to the United Methodist Women.

On March 16, 1955, the official boards of Calvary and Bethel Churches met and, under the leadership of Rev. J. B. Smith, Superintendent of the Thomasville District, and Rev. Buford Fulford, pastor of the Cairo Circuit, a new Charge called Calvary-Bethel was formed. Rev. Fulford was appointed the first pastor.

The ground was broken in September 1955, to build a new parsonage. A. M Gainey Jr., Carl Jones and Earl Williams from Calvary, and Leroy Hopkins Jr. and M. J. Johnson from Bethel were appointed as the parsonage building committee. The parsonage was dedicated by Bishop Arthur J. Moore on March 4, 1956. In 1959, new pews and flower stands were bought and the pulpit, pulpit furniture, and altar rail were refinished. In 1966, Centennial joined the charge. Central heating and cooling were added to the building and the Sunday school classrooms were remodeled for use as a Social Hall in 1974. 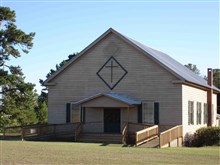