Peter's Church and Peter's School are names mentioned in an old account book (1873 - 1914) belonging to George R. Strange, along with a listing of pastors of Peter's Church and Springhill Church. A note by the 1892 entry showing Rev. W. R. Tally as pastor states: "New church built." This account book is now owned by Aris Wheeler, a descendant of George R. Strange (a member of Springhill Church in 1873). Springhill Cemetery dates back to 1860 and likely there was a building or meeting place as well. Johnson Gainous stated that his great-grandfather George Whitfield Gainous (b.ca. 1812; d. 1860) was "the first or one of the first" persons buried in the cemetery at Springhill. According to estate proceedings in the Decatur County Probate Office in Bainbridge, George Whitfield Gainous "died some short time since within this county" and a petition was filed to obtain "temporary letters of administration."

Minutes of the 11th Annual Thomasville District Conference held in Camilla on June 1, 1876, shows Charles Blacker was among those attending from Ochlocknee Mission. The minutes read: "Bro Blaker reported for Springhill: ‘Bro. J. W. Jackson is doing well and is imparting new life to our church. He has good congregations on Sunday and we have good meetings.’ We would like to have a Sunday school at Springhill; we have the children but no teachers." The exact date of the first church built on the site before 1873 is not known. It was a small one-room log building with wooden shutters and a single center entrance. This primitive structure rotted down, and a larger building with a partition in the center and two entrances with a porch was constructed. This second building was also used as a school until the 1920s. In 1890, five acres of land was deeded by J. T. Larkin to trustees Charles Blaker, J. T. Larkin, and Robert H. Whigham of the Springhill Methodist Episcopal Church, South.

Springhill has been at various times over the years on the Pelham, West Bainbridge, and Cairo Circuits and, along with Orange Springs, on the Whigham-Climax Charge. Today the church is on the Whigham-Springhill Charge and continues to serve the community. 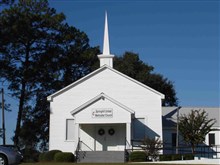