Hopewell UMC got its name, according to history, when a traveler, passing by on a horse, chatted with members working on the first church and left the workers saying, "Hope them well on their building." After the traveler left, the workers suggested the name of "Hope Well" for the church. The first church was built in 1842 from virgin forest. Information suggests that it was first built on the present site of the church. Before the Civil War, the second Hopewell Church was built, but it was later destroyed by fire. The third Hopewell Church was built on the present site after the Civil War and still stands today. Mr. Putman Smith, a devout Methodist, and wealthy planter took a leading part in building the third church by contributing funds. Other leading members of the church who took an active part in its construction were the Snipes, Walls, Sniders, McCorkles, Chapmans, Myricks, and Sellars.

During the pastorate of B. L. Jordan (1921 - 1924), an annex was added to the church. In 1938 kerosene lamps were replaced by electric lights. In the early 1950s, a potbellied stove used to heat the church was replaced with gas space heaters. In 1956, the annex was renovated using funds raised by donations, barbeques, cake sales, and apron sales. Stained glass windows were donated by families of the church in memory of loved ones in 1960.

In 1962, four churches on the charge known as the Ellaville Circuit were divided to form two charges. The Ellaville church became a station church and Hopewell, Concord, and Andrew Chapel formed a circuit. In 1964, Hopewell, Andrew Chapel, and Concord were named the Circuit of the Year for the Americus District. Hopewell was named the Church of the Year for the Americus District in 1967. Also in 1967, an annex was completed adding eight classrooms, a larger kitchen, a dining/recreation area, and the first indoor toilets. This was celebrated with an Open House. As late as the early 1950s, women sat on the right side of the church and men sat on the left side of the church with a separation between the two areas, but this was removed in 1967.

The first women to serve on the church board were Marjorie Sellars, Florette Snider, and Lois Turner in 1968. The sanctuary was centrally heated and air-conditioned in 1970. In June 1975, Hopewell voted to become a full-time church and was placed on the Hopewell-Concord Charge. Hopewell had morning and evening services every Sunday except for the fifth Sunday.

On January 2, 2011, the nursery was dedicated in memory of Jean Eason for her many years of service to the children of Hopewell UMC with a luncheon following the dedication service. In 2016, the Ellaville/Schley County Historical Society started the task of recording all of the graves in the Hopewell UMC cemetery. Hopewell UMC became a station church after Concord joined Butler UMC in 2017. 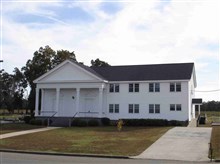