Although no written records have been found to document the exact dates, there are a number of recollections gathered in 1940 which indicate that there was a Methodist Church made of logs located near the present Union Church in the 1830s. The building was said to have also been used as a school, and there were apparently no regular services held. On September 9, 1857, Daniel James deeded the land for the "New Union Methodist Church," locating it so that he could look from the front door of his house and receive some blessing. The church was not apparently a regular appointment of the South Georgia Conference until the early 1880s. Among the earlier volunteer local preachers who served the church were Rev. W.B. Merritt, Rev. W.J. Short, and Rev. Malcolm Hair.

The circuit's first parsonage was purchased on November 2, 1907, from Mr. T.B. Rainey by the Marion Circuit. A new parsonage was built around 1962. In the early 1930s, the pump organ was replaced with an upright piano and, in 1941, electricity was available. In the early 1950s, the clear glass windows were replaced with gold and purple stained-glass and Grady and Justine Rogers formed the first MYF. In 1954, Union's old, original pulpit was taken out and replaced by the current pulpit stained a mahogany color finish. In 1958, Union UMC started having two services a month. A new annex was built across the back of the church in 1964 and 1965 which was used for Sunday school rooms and a fellowship hall. A metal steeple was built by Grady Rogers with help from Bob Jernigan and other churchmen on June 20, 1975, but this steeple was destroyed by a tornado in 1994 and replaced by the current steeple in 1995.  A new fellowship hall was built in 1979 by Albert Simmons and Willie Raybon was hired as the first choir director in 1976. In 1991, the land was donated by Mike Moon for the current brick parsonage north of Buena Vista. In 1996, Rev. Mike Benson began a project to beautify the cemetery which has been in use since the 1830s. Simmons Hall was remodeled and enlarged in 2003. 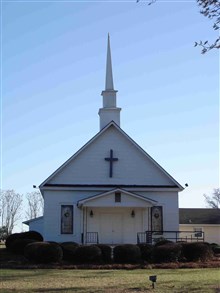