Methodism has been a part of American history for over 200 years, and Alpha has been a part of that for 175 years. Alpha was organized by Trinity Methodist Church of Savannah, GA in May 1941, as Alpha Mission. It is, as its name implies, the "alpha" or first mission established by the rapidly growing congregation of the "mother church," Trinity. In addition to providing the first pastor for Alpha Mission, the membership of Trinity Church organized a Sunday school and provided materials until such time as the school could operate independently. Records show that the first Sunday School Superintendent, Matthew Stone, also donated the land for the church building. The building was first located at what is now Gravel Hill Cemetery. This is located midway between Pooler and Bloomingdale on the south side of Hwy 80.
The first pastor of record was Rev. J.E. White, who served 1841-1842. The first presiding elder that we have a record of was J.E. Evans, a former pastor from Savannah. He was elected to this office by the 1843 Annual Conference, which met in Savannah. In 1878, it was decided to move the church to Bloomingdale for the convenience of its members. The move was completed in 1879 and dedicated in July. R.E. Meldrim, a Trustee, gave the church three acres of land in Bloomingdale to construct the one-room wooden structure. The Trustees at this time were W.H. Shearouse, T.P. Wolf, Charles DuBose, Edward Douglas, and R.E. Meldrim.
Through the years, several changes were made to the building. In 1915, a bell and bell tower was donated by Mr. and Mrs. Dan Waller in memory of their daughter, Lulu. In the early years, the bell was rung as a signal. In 1924, two wings were added, one on each side, to use for Sunday school classrooms. A new tin roof was added in 1938.
Until First Baptist was formed on November 5, 1926, Alpha was the only church in Bloomingdale. In 1930, the congregation started a building fund for a new church building, as the original building was not large enough to serve the needs of the congregation. Under the leadership of Rev. Eugene Cariker, plans started for the design of the new building to be built on Hwy. 80 at Church Street. The ground was broken on August 29, 1954, and the present building was opened for services on March 13, 1956.
In 2006, Alpha UMC celebrated 50 years in our current building. Rev. Gene Cariker was able to return to deliver the sermon. A new social hall was added in 1987 and a 2012 renovation brought a nursery update, new carpets, interior doors, and paint throughout the downstairs of the main building. Valentine's Day 2016, kicked off an exciting year-long celebration of Alpha's 175 years of ministry! We look forward to many more years of spreading God's love and being "Fishers of Men" in Bloomingdale. 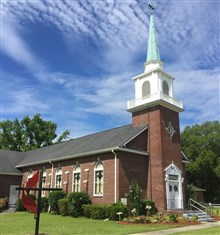