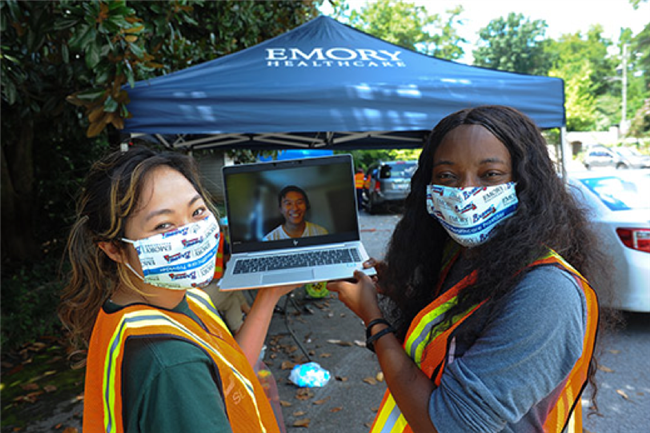 Emory students help Atlanta communities have ‘Faith in the Vaccine’

The day after Georgia reported its millionth case of COVID-19, a band of Emory students tested their belief that together they could make a difference in the course of the pandemic.

Serving as Faith in the Vaccine Ambassadors through Emory’s Office of Spiritual and Religious Life (OSRL), the students collaborated with Emory Healthcare on that August day to set up a mobile vaccination site in the parking lot of a church two miles north of the university’s quad.

Could faith help bridge the hesitancy and mistrust that some communities have had toward the vaccine, which is one reason that less than half of Georgians had chosen to get it?

“We sought out spaces like this because churches can inspire trust,” says Kimani “Kiki” Francois, a student in Emory’s Candler School of Theology who helped organize the vaccine site at St. Bartholomew’s Episcopal Church.

“This is our opportunity to be on the ground and meet people who are unvaccinated, who can ask us questions and we can be the familiar faces,” notes Francois, who is pursuing a master of divinity degree. “There are people who tell us, ‘I remember you. Maybe I’ll take a look at getting it.’”

The Faith in the Vaccine Project is part of a partnership between Emory OSRL and Interfaith Youth Core, a Chicago-based nonprofit that supports building bridges across diverse religious beliefs. OSRL applied for and received a grant to support students and recent alumni, both undergraduate and graduate/professional, to address vaccine trust, education and access.

As IFYC explains, “While African American, Native American and Latino/a/x communities are particularly ravaged by COVID-19, they also have less access to and in some cases are less likely to trust the vaccine. Politically and religiously conservative white communities, often evangelical, are also less likely to trust the vaccine. National research shows that individuals in these groups are more likely to be connected to religious communities, which are vast sources of trust and social capital.”

In spring 2021, Emory OSRL selected 18 Emory students for the six-month paid internship. They split into teams that went on to work in specific communities in the Atlanta area, many of which students had personal connections to, such as Bosnian Muslims in Gwinnett County, and Black and Latinx queer men. Another group of ambassadors worked with Emory’s Hindu chaplain in order to make connections with Hindu, Sikh and Buddhist religious communities.

The students connected with organizations that had cultivated trust in those communities, from mosques to churches to gay ballrooms. They brainstormed ways to serve and support, such as translating pamphlets about the vaccine and offering personalized education sessions. As the program developed, some teams also set up “shots in arms” clinics.

“In public health, the relationship between the authorities and the community has to be nurtured, or their response may not be what is expected,” says Isam Vaid, OSRL’s Muslim Religious Scholar, who co-led the program with Emory’s dean of religious life, The Rev. Dr. Gregory McGonigle. “The synergy these students created is part of the rich dynamic culture of Emory, which has had an interfaith health program between the schools of public health and theology for many years.

“The university is able to recruit students nationally and internationally who bring their unique perspectives to projects like this and who help connect us to communities outside the Emory bubble, through multilingual and multicultural translations of COVID-19 materials, for example,” adds Vaid, an alumnus of Emory’s Oxford College, Emory College and Rollins School of Public Health. “Their diverse experiences combined with the access to all the resources of Emory to make a very inspiring difference.”

On the sweltering afternoon of the vaccine clinic at St. Bartholomew’s Episcopal Church, Francois and others stayed busy answering questions from people who were considering shots or waiting to get them.

Tameka Mumphrey had not questioned the vaccine, but had had a hard time scheduling it. After getting her second Pfizer dose at the drive-through clinic, she waited in her car as instructed, in case she had any reaction to the shot.

Her family, she said, had been divided on getting vaccinated. Her mother does not believe that flu shots work and did not want the COVID-19 vaccine either. But after a middle-schooler in their family tested positive, and was too young for the vaccination, the family began to shift their thinking.

“We pray and believe in God,” Mumphrey, a medical assistant, said at the event. “We want to do our part.”

Nearby, The Rev. Dr. Lisa Heilig thanked the Emory students for this clinic and a previous one the month before. Heilig, who holds a master of divinity degree from Candler, directs the Toco Hills Community Alliance, which is located on church property and serves people who need food, clothing and other essentials in nine ZIP codes around Emory.

“The vaccine clinic is something we wanted to do, and when the students approached us, we were absolutely honored and privileged and jumped on it,” Heilig says. “We serve some of the most vulnerable populations, who have legitimate reasons to mistrust institutions. Our key value is hospitality, and we hope that because we work with them to have relationships, that trust will be there for services like this, too.”

In downtown Atlanta, another ambassador, Rachael Lewis, joined forces with the Dignity Pack Project, which distributes hygiene products, and the Emory COVID-19 Relief Coalition, to reach out to people with HIV and those who lack housing. She helped distribute hygiene products in Woodruff Park while passing out her homemade flyer about a vaccine clinic. A graduate of Emory College who will earn her master of public health degree from Rollins School of Public Health next year, she also created an infographic to benefit people who got vaccinated at a church in the Grove Park neighborhood.

“Eleven people were vaccinated with the J&J vaccine, one of whom had never received any kind of vaccine in his whole life!” she reported to her fellow ambassadors. “A very exciting and encouraging experience. It was great to partner with the local church because of the trust they have within the community. While our pop-up clinic was going on, the church hosted their weekly Saturday morning clothing drive and food pantry. Some of the people that were vaccinated attended the church event primarily, but because we were conveniently there and were ‘pastor approved,’ they received their COVID-19 vaccine at the same time. It was a great partnership.”

Back at the church clinic, John Shen felt inspired by connecting with strangers who need a potentially lifesaving injection. Fluent in Spanish, he saw his role as a bridge-builder, to offer information and compassion so they would roll up their sleeves.

“I see vaccination as a very selfless communal act, that you are not just protecting yourself but also the people around you,” says Shen, a Rollins student completing a master of science degree in public health.

Shen took part in the clinic virtually from his hometown of Boston, and his face peered out from a laptop held by Le Linh, a theology student and a resident chaplain in Emory OSRL. Le is training to become a minister, and she said a big part of that role is truth-telling.

“Religious faith does keep a lot of people from getting vaccinated who are confused between theology and political ideology,” Linh explains. “There is a big population in many denominations resisting vaccinations for political reasons, not because of what they believe [religiously]. We want to help them make a distinction.”

For some of the Emory Healthcare staff administering the vaccine, the work bordered on the sacred.

“This is the best and most fulfilling job I have had in nursing, and I come from the ICU,” says registered nurse Teri Korfas. “This is an act of service like no other because there is a giant educational component to it. People just don’t know about the vaccine. Whether it’s religious or moral, I feel like we are here to help each other.”

The two mobile clinics at St. Bartholomew's Episcopal Church resulted in 73 people getting vaccinated, and Francois was thrilled that one of them was in her family. In addition, her team created a pastoral toolkit that nonprofit organizations and the faith community can use to organize their vaccine outreach, and they offered an educational workshop about how to work with off-campus organizations to their fellow ambassadors.

In September, the work of Emory’s Faith in the Vaccine ambassadors was celebrated in a national rally hosted online by Interfaith Youth Core as the summer program transitioned to the fall. Francois spoke at the rally about the importance of presence and relationship, and the need to listen to and address the community’s concerns and questions. And she also stressed the importance of persistence to break down the barriers to access.

“We have been so blessed by the opportunity to participate in this national interfaith initiative to address COVID-19 vaccine trust, education and access at a crucial time, when we know communities of faith and meaning can do so much to support well-being in body, mind and spirit,” McGonigle says. “It has been beautiful to watch this interfaith cohort of students come together, find ways to serve, and learn about themselves and our region in ways that have benefited them and the community.”