Live Streaming of the Consecration Service, July 15, at 10:00 am

Bishop Robert Lawson Bryan has been assigned to the South Georgia Conference and will serve as our bishop for the next four years. The assignment begins Sept. 1.

Bryan was elected bishop on July 13 by the Southeastern Jurisdictional Conference. He is currently serving as senior pastor at Montgomery First United Methodist Church in Montgomery, Ala., in the Alabama West-Florida Conference.

Following his election he stated, “It is an honor to be elected by colleagues in our jurisdiction and to see God at work. For the past year, I have referenced Ephesians 2:5, ‘Alive Together in Christ’ and ask for your prayers as I seek God’s will as a leader in our SEJ Conference.”

Bryan became one of 13 active bishops serving the Episcopal areas of the 15 annual conferences that make up the Southeastern Jurisdiction. 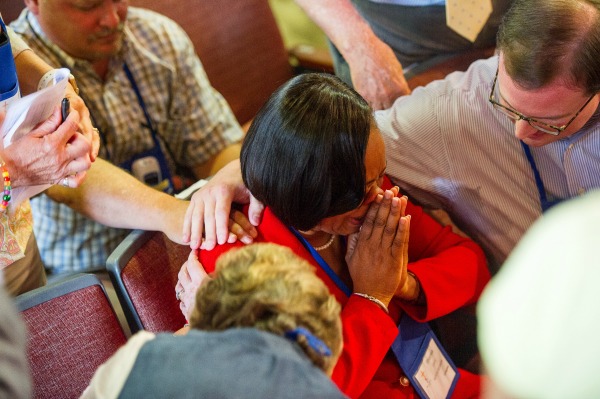 The Southeastern Jurisdiction elected all five bishops on day one of the SEJ Conference. On the first ballot taken, Rev. Sharma D. Lewis, district superintendent in the North Georgia Conference, was elected the first African-American woman bishop in the Southeastern Jurisdiction. She is also the first African-American woman elected bishop in the United States since 2000. She received 258 votes out of 362 valid votes cast. Below are the results of the 10 ballots. Prior to each ballot, various delegates and leaders offered inspirational prayers.

The 2016 Southeastern Jurisdictional Conference will meet July 13-15 at Lake Junaluska Conference and Retreat Center in Lake Junaluska, NC. The 2016 Conference theme is Hope and Unity in Christ, based on Hebrews 6:18-19a.

Equal numbers of laity and clergy, elected by each annual conference, will be delegates. The South Georgia Conference has 8 clergy and 8 lay delegates as well as 1 clergy and 2 lay alternates.

This year the Southeastern Jurisdiction will elect five new bishops. Any United Methodist ordained elder may be elected a bishop by any jurisdictional conference. Each jurisdiction establishes the percentage of votes needed for election. Voting by ballot continues until someone receives the required number of votes. This year the balloting will be electronic.

The South Georgia Delegation members are as follows:

The agenda for the 2016 SEJ Jurisdictional Conference can be downloaded here.