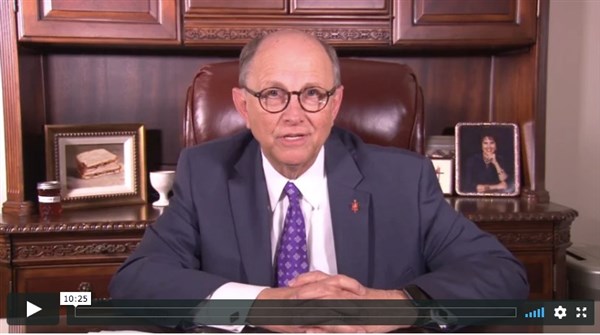 Nearly 1,000 South Georgia United Methodists gathered Saturday, March 9 at the UGA Tifton Campus Conference Center in Tifton to learn more about the 2019 General Conference session and the future of the South Georgia Conference.

The meeting began with worship and prayer and both were woven into the day. Prayer was a focal point and scripture was incorporated throughout the two-hour session. Ben Drennan, Minister of Music and Worship Arts at Cordele First United Methodist Church, led worship along with the Cordele First UMC choir. Revs. Teresa Edwards and Josh Bizzell guided the times of prayer.

After introducing the delegation and thanking them for their service, Bill Hatcher and Rev. Don Adams, delegates to General Conference, gave reports on the outcome of the special session of General Conference.

They shared that General Conference delegates passed by a 438-384 vote the Traditional Plan, which retains restrictions against “self-avowed practicing homosexual” clergy and officiating at or hosting same-sex marriage ceremonies and requires stricter enforcement for violations of church law.

“What exactly does that mean?” Hatcher said. “The present language in the Discipline remains unchanged.”

Rev. Adams shared details of the Traditional Plan and two pension petitions that were passed. He also explained that a passed “gracious exit” plan’s constitutionality is in question and is being looked at by the Judicial Council.

There is a “breathtaking division” in The United Methodist Church, he said, and it was felt and seen at General Conference.

“Everyone left feeling grief for the church,” Rev. Adams said. “The reality that we cannot keep trying things in the same way and expect a different outcome should be obvious.”

Revs. Jay Hanson and Ben Gosden presented a report from the Foundations for the Future of South Georgia Task Force and announced that a “gracious exit plan” will be presented for vote at the upcoming Annual Conference session.

The details of the South Georgia Exit Plan are still being worked out and will be released in the coming weeks, but they generally follow the disaffiliation plan that was passed at General Conference and would allow a local church to exit the conference if two-thirds of the church conference votes for disaffiliation. Churches would be able to keep their property if they meet pension and apportionment obligations. This exit plan would be needed if the Taylor Petition passed at General Conference is found unconstitutional.

“The power of The United Methodist Church truly is found in its diversity,” Rev. Gosden said. “And the grace of the Church is found when that diversity is met with love.”

Bishop Bryan welcomed everyone to the gathering, calling it a launch event for the future of the South Georgia Conference.

“This is the beginning of South Georgia time,” he said. “The time when we begin discerning South Georgia’s future.”

He also reiterated that all are welcome, loved, and needed in the South Georgia Conference.

“Whoever you are and from whatever part of the annual conference you have come, you are welcome. We need you. Every one of you. Every person. Every church,” Bishop Bryan said as he stressed the Conference’s “Aliveness Together in Jesus Christ,” found in Ephesians 2:5.

He outlined the Conference’s next steps and emphasized that they would be rooted in scripture and prayer. The process used will be the same one that has guided conference leaders for the past three years, the 4-D process: Discover, Dream, Design, and Deliver.

Bishop Bryan asked everyone to fully engage in the process as God uses it to take the Conference into the future.

“We are not doing this for ourselves,” he said. “We are doing it for the entire denomination and for future generations in South Georgia.”