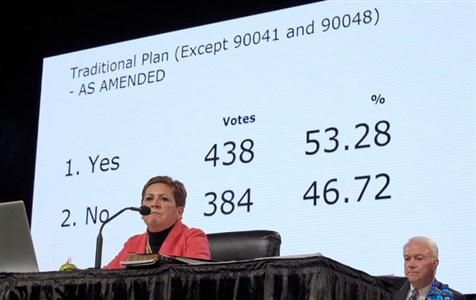 The special called session of General Conference began with prayer and ended with protest.

After three years of preparation, planning, and prayer, the 864 clergy and lay delegates who gathered Feb. 23-26 at The Dome at America’s Center in St. Louis, Mo. passed an amended Traditional Plan 438 to 384.

The Traditional Plan keeps the church’s current language around sexuality and increases accountability by streamlining the processes to enforce penalties for violations of The Book of Discipline related to marriage and ordination of LGBTQI persons. The delegates also voted to ask the Judicial Council to review the constitutionality of the approved legislation. The Judicial Council, the church’s top court, will next meet April 23-26 in Evanston, Ill.

“The General Conference has spoken once again,” said Bill Hatcher, head of South Georgia’s delegation and a member of Statesboro First United Methodist Church. “The present language of The Book of Discipline remains unchanged. Marriage is still defined by our church as a union between one man and one woman. … While there is much division and heartbreak in the U.S. church, we must move forward and love and care for all of our members.”

Bishop Lawson Bryan acknowledged that people within the denomination and conference have differing thoughts about the outcome: some are relieved, some are confused, and others are grieving.

But, he said, no matter the votes or decisions made at General Conference, the South Georgia Conference is still – and always will be – one that loves and welcomes all God’s children.

“This is the time to move from focusing on plans to truly focusing on people,” he said in a video immediately following General Conference’s conclusion.

“Whatever you are feeling right now, there is a place for you in the South Georgia Conference. Move toward those around you, let them know you care for them, and give them the opportunity to care for you.”

In addition to passing the Traditional Plan, delegates also approved two Wespath pension petitions and a disaffiliation, or an “exit plan,” petition, via a minority report.

The pension petitions state that churches that decide to leave the denomination must pay their fair share of pension liability and that exiting clergy may retain their pension but it is converted to limit further liability to the conference.

The disaffiliation plan, if ruled constitutional by the Judicial Council, would allow for local churches to exit with their property and assets if two-thirds of the members vote to do so and if they pay one year’s worth of apportionments and they care for pension
liabilities.

Care for One Another

First, let us take time to care for each other. Since 2016 we have prayed, studied, held district meetings, and taken many other actions to consider the various Way Forward plans that were proposed. After three years, it is understandable that many of us may feel somewhat drained. Some are feeling relieved that it is over and a decision has been made. Others may be a bit confused and need time to reflect on the outcome. And there will be others who were hoping for another of the plans to be approved and therefore are experiencing grief over the outcome. This is the time to move from focusing on plans to truly focusing on people. Whatever you are feeling right now, there is a place for you in the South Georgia Conference. Move toward those around you, let them know you care for them, and give them the opportunity to care for you. ​

Second, make a conscious effort to be in worship this Sunday and the seven Sundays from March 10 to April 21 (Lent and Easter). Something happens to us when we are together with brothers and sisters in worship, when Jesus is present as he has promised to be, that we can't make happen any other way. ​

Come Together on March 9

General Conference is the top policy-making body of The United Methodist Church and is the only voting body who can speak for the denomination. The next session will be held May 5-15, 2020. Eight delegates, half clergy and half laity, represented the South Conference at the 2019 gathering. Click here for more coverage of the 2019 special called General Conference Session.