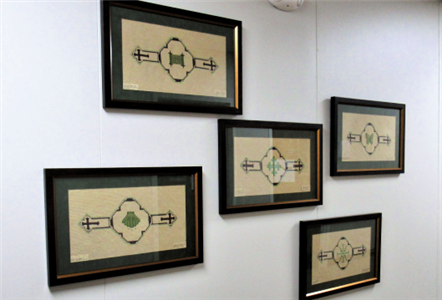 So often these days, when an item has reached the end of its usefulness or when it’s a bit worn or dated, it’s tossed aside, thrown in the trash, or shoved in the corner of an attic, never to be seen again.

In January 1982, 18 women from the Wilmington Island UMC congregation began a project to create needlepoint covers for new altar kneeling cushions. Seventeen months and hundreds of thousands of stitches later, the cushions were complete and dedicated in a May 15, 1983, worship service.

Years of kneeling takes a toll, however, and in 2019 the cushions needed to be replaced. Instead of discarding them, then-pastor Rev. Rob Grotheer asked the church’s sewing group, the Hearts and Hands Ministry, if they could somehow be repurposed.

“Over time and with a lot of interesting suggestions we thought the best way to honor and preserve them was to frame them,” said church member Jane Spano, who also participated in the Hearts and Hands Ministry. “The backs (of the cushions) were worn and there was really no way to replace them, but the fronts were still in pretty good shape.”

Designed by Wilmington Island UMC member Joan Holloway, each of the kneeling cushions depicts a different Christian symbol. Holloway, now 85, used traditional Christmon patterns as a guide for her patterns.

“I’m very artistic and have been all my life,” said Holloway, who sketched the designs on graph paper. “I like designing things and being creative.”

Each kneeling cushion – with designs that include an Alpha and an Omega symbol, a crown of thorns and nails, grapes, a shell with drops of water, a butterfly, a ship, and more – required more than 50,000 stitches, said church member Donna Knight, who helped preserve and frame the needlework art.

“I’ve done some needlework before and I know the intensity and how long it takes to do something of that nature,” she said. “We just couldn’t see getting rid of them or throwing them over in a corner to be lost or chunked later on.”

It was important to the Hearts and Hands Ministry, Rev. Grotheer, and current pastor Rev. Doug Walker that the artistry, history, and heritage displayed in the kneeling cushions not be destroyed, she said.

By framing each of the 16 cushions, current and future generations of Wilmington Island UMC worshipers will be able to appreciate and enjoy the art and the meaning in each symbol, Spano and Knight said.

“I’ve seen these symbols all my life, but I never really studied them or looked at the meaning of each one until now,” Knight said.

The sewing group carefully dismantled the kneeling cushions, preserving the stitched portion, and had each professionally framed. They now hang in the church’s sanctuary, narthex, and education wing. Each framed cover includes a description of the symbol and the names of those in whose memory or honor it was dedicated.

“How many times did I kneel on those kneelers and never really pay attention to the symbol or its significance? But once they’re hanging up with an explanation it’s really a beautiful thing to acknowledge and see,” Spano said. “It tugged at my heart to think how many kneeled on those kneelers and prayed with thanksgiving, joy, fear, tears, or sorrow. They have special meanings.”

Holloway, who put months of work into each kneeling cushion and whose life is intertwined with Wilmington Island UMC – she’s a charter member and her daughter, Rev. Karen Prevatt, was the first baby baptized at the church and the first person who came into the ministry from the church – is proud to see her work and the work of so many others displayed.

“Making these gave me an opportunity to use my talents and to really get to know some people,” she said. “When I went to church and took communion I knew what was underneath me – the love and the effort that all the women put into them. It was a joy. I’m proud of what we did and the years they served the people.”

Spano sees them as a timeless love offering.