A father’s love: father and son journey together to the Holy Land 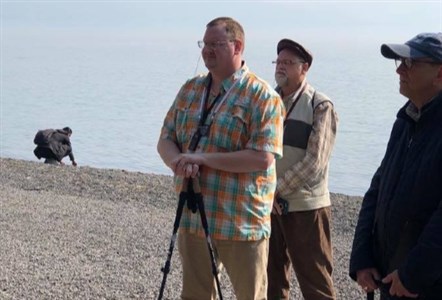 As Rev. Jonathan Fuller walked along rough and craggy terrain while following Jesus’ footsteps during a recent Holy Land pilgrimage, one person was always a step behind, ever-watchful and mindful.

A few weeks ago, the father and son had the opportunity to travel to the Holy Land together with a group of about 90 South Georgia United Methodists. The pilgrims explored Biblical sites such as the Sea of Galilee, Jerusalem, Bethlehem, Jericho, Nazareth, Capernaum, and more.

Rev. Fuller, who was diagnosed with Ataxia at age 26, struggles with coordination, movement, and fatigue. A degenerative disease of the nervous system, Ataxia is a movement disorder that makes Rev. Fuller uncoordinated.

“I wanted to go (on the trip), but I was very hesitant because of my abilities,” he said. Someone strong enough to help in case of falls would need to accompany him, and his father said yes without hesitation. “Having my father with me was a necessity. I can’t even put into words the difference him being there made.”

During their time in the Holy Land, Fuller was always close enough to place his hand on Rev. Fuller’s jacket, letting his son know he was there to guide or help.

“Sometimes he struggles every day. Sometimes he’ll stumble. While we were (in the Holy Land) we had a few close calls, but I was there with him every step of the way,” Fuller said. “He powered through every obstacle and anything that was ahead of him, whether it be steep stairs or the path Jesus walked. He just trudged on.”

Never far from his son’s side, Fuller would often help control Rev. Fuller’s movement by holding the back of his jacket tightly. Rev. Fuller also used two walking sticks to give him better coordination and control.

“The trip was so instrumental, so impactful. Having read and studied the Bible for years, seeing the places Jesus walked and walking His footsteps was surreal,” he said. “As a Christian, to actually walk in the footsteps of your Lord and Savior is phenomenal. It’s so much more than a trip.”

Having his father accompany him made the trip even more powerful, Rev. Fuller said. His father – an outgoing, gregarious person – bonded with their travel companions and made lifelong friends. His faith was strengthened and encouraged.

“It was great experiencing that journey of faith with him. I’ve never experienced anything like that with my father.”

Energetic, upbeat, passionate, and relationship oriented, Fuller is a sales leader at H.T. Hackney in Morrow.

But Fuller says his real calling is that of a father, serving alongside his son.

“When I retire, I’m called to and ready to do whatever he wants to do and I’ll go wherever he needs me,” the elder Fuller said. “I’m going to help him in any way. If he called me today I’d stop what I’m doing and help.”

Calling the Holy Land trip “God ordained,” Fuller said the pilgrimage was life changing. The father and son grew closer to one another and God, and both said that a stop on the Sea of Galilee’s shore was one of the most meaningful of their journey.

It was there where Fuller knelt and washed Rev. Fuller’s feet and where Rev. Fuller, legs trembling as he struggled to maintain balance on uneven ground, led the group in a brief devotion.

Long before the pilgrimage, Fuller, who’s known affectionately as “Papa Rob,” committed to help and support his son as his condition and handicap progresses.

“I’m going to be with him for the long run, whatever he wants to do. I hope it’ll be a great journey and somehow use that to further God’s kingdom,” he said. “It’s a privilege to be his dad and to help him get to where he needs to go. Being with him, my son, who has clearly been called … his ministry won’t end, no matter what stands in the way. I know that about him, I know that about me. I’m with Jonathan for the long haul. I do this because I love him. He’s a special guy, and I’ve known that since the day he was born. My faith grows more every day because of him.”