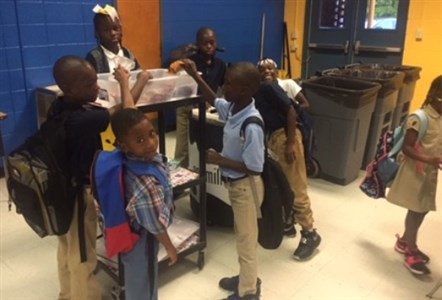 A program in Dougherty County, launched by Albany First United Methodist Church, helped save 25.5 tons of food from the landfill last year.

But more importantly, it provided food for nearly 1,500 children during the weekends, a time when they don’t have the free breakfasts and lunches that schools offer.

Unlike other food programs or ministries, Helping Hands doesn’t rely on food donated by churches or the public. It instead uses the uneaten and unopened food kids don’t eat to help other kids.

After eating breakfast or lunch, children can donate the whole fruit or unopened, prepackaged food or drinks they didn’t eat to Helping Hands. Students donate items like granola bars, cereal, crackers, peanut butter and jelly sandwiches, cheese sticks, juice, and milk. Because all Dougherty County public schools participate in the free breakfast and lunch program, all food has already been paid for.

Items are collected and sorted by student volunteers and stored, refrigerated, or frozen until Friday when they are distributed to kids who might otherwise go hungry during the weekend. This year, 35 children per week, per school are receiving large insulated coller bags full of food.

“Kids are helping kids. They learn that they can donate this food to Helping Hands so they can help each other and not waste it,” she said. “The program is so awesome because it is food that would have gone into the trash.”

Retired educator Cathy Revell has seen firsthand the food insecurity that exists in Dougherty County. According to the Georgia Food Bank, more than half a million children – one in four – don’t have enough to eat.

“We are one of the top 10 counties with food insecurity,” said Revell, an Albany First UMC member who helped launch the Helping Hands Ending Hunger program in Dougherty County. “I know there is a need for the food. And I cannot stand waste, and every bit of that food was going in the trash can.”

Once it’s up and running, the program costs very little, other than the cost to replace a few new insulated cooler bags a year. There are startup costs, however, but they are minimal, Haygood says, and run about $1,500.

There’s a Helping Hands start-up fee, plus the cost of refrigerators, freezers, storage bins, coolers, shelving, and other necessities that are needed to implement the program at each school. Students and staff have to be trained to ensure they are following the operating procedures of the program in order for everything to be safe and legal.

But the benefits far outweigh the costs, say Haygood and Revell, and the program has been well received by the children, the schools, and the community.

“The kids in our county need the food,” Revell said. “This food is kid friendly. You don’t need to cook it, you don’t need an adult to open it, and the kids can eat it themselves.”

She gives God credit for bringing Helping Hands to Dougherty County and for its success.

“God’s led it the whole way, there’s no doubt about it,” she said. “It’s been amazing. I never fathomed it would be where it is today.”