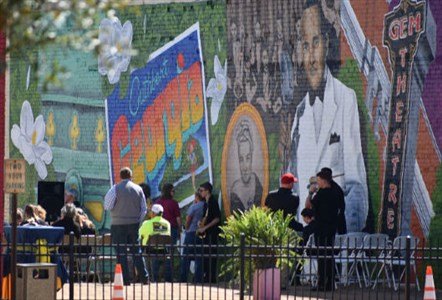 What’s true of many small, rural communities is also true of Cuthbert, a Southwest Georgia town of about 3,800 people.

“There were more things to do here 50 years ago than there are now,” said Mary Jane Salter, a 1968 Andrew College graduate and longtime Randolph County resident.

But times are changing in Cuthbert, for the better, thanks in large part to Andrew College’s efforts in the downtown area.

“Rural communities are trying to build themselves back,” said Salter, who serves as special assistant to the president for development at Andrew College. “They’ll never be major metropolitan areas, but they can be better than they are. The college has been an integral part of trying to turn the lights back on downtown.”

Andrew College’s efforts include renovating six buildings and making the downtown area, which is about two blocks from the college, a center for arts in the community.

The college has turned one building, located just off the downtown square, into its ceramics studio. Another building has become the production site for the college’s theater department. The music department will move downtown as soon as the renovations are done on its building.

While the new-to-them buildings and renovations are exciting for Andrew College, they’re also good for Cuthbert. The college hopes that, by helping create activities and driving traffic downtown, others will want to do the same.

“This has people excited about coming back downtown again,” Salter said. “It has opened another world for our community, and the best thing is that it’s opened up hope that we can become better. The more people we can get downtown, the more we think the square will come back to life, and if it comes back to life, it will bring other things back to life.”

The art shows, receptions, dinner theaters, and more have brought vitality to once abandoned and vacant buildings, says Patricia Goodman, retired executive director of the Randolph County Chamber of Commerce.

“They’re bringing the arts to downtown Cuthbert,” she said. “It’s been really a good thing to see growth and to see some activity come back to life on the square.”

The community has rallied behind Andrew College’s efforts, as have local churches, including Cuthbert United Methodist Church.

“When the Methodist church decided to put this college where they put it in 1854 they obviously knew what they were doing,” Salter said. “There have been times when things have looked bleak, but the doors have never closed. I know God has a place for us in doing this. I believe that, because we are a beacon of light.”