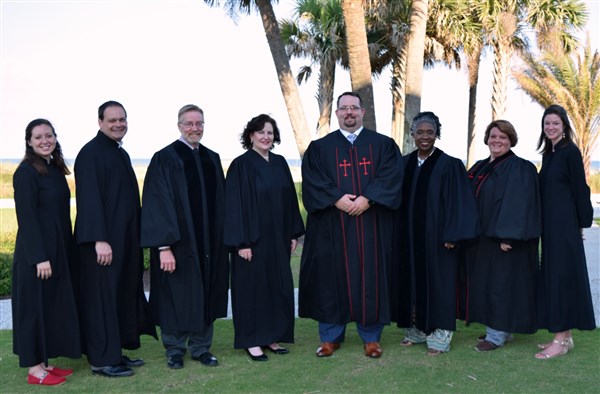 In the Business Session Monday morning, the conference:

A Memorial Service for those faithful servants who have served in our Conference was held Monday afternoon at 2 p.m. Rev. Leigh Ann Raynor, retired South Georgia minister, reminded us of our calls to serve and to thank God for calling us all into ministry.

“Remembering our calls, shouldn’t we be saying thank you, Jesus, for calling us? As we remember these who served, let us say thank you for letting us be among those on whom you shower your grace,” Rev. Raynor said.

Those being remembered include:

In the Business Session Monday afternoon, the conference:

The Service for the Ordination of Deacons and Elders with Commissioning

The Conference gathered Monday evening for the service for the Ordination of Deacons and Elders with Commissioning. Bishop R. Lawson Bryan, episcopal leader for the South Georgia area, was the preacher for this service. Bishop Bryan’s sermon, “The Great Privilege of Ministry,” was from Matthew 9:35-10:8.

“We pay attention to Jesus having his own commissioning service for the disciples,” Bishop Bryan said as he addressed those being ordained and commissioned.

“God has given you exousia - the authority that comes from within. It is who you are. Never let go of that.”

The great privilege of ministry, he said, is to see healing occur.

“The fundamental ministry of Jesus is healing. It’s about broken people and things being put back together,” Bishop Bryan said.

He invited the ordinands and those being commissioned to look in their neighborhoods and communities and heal the sick, raise the dead, cleanse the leper, and drive out demons.

“Laity and clergy, that’s the great privilege. Together, healing, cleansing, raising, and driving out demons, in the ministry of Jesus Christ.”

Bishop Bryan presided over the ordinal rites and was assisted by Mrs. Gloria Morgan, Conference Lay Leader, representing the laity, and Rev. Scott Tucker, Chair of the Board of Ordained Ministry, observed the ordinal rites.

The following individuals were commissioned as Probationary Clergy Members:

The following individuals were ordained as Full Conference Members:

The Board of Ordained Ministry processed with the ordinands as a sign of the covenant community into which these newly ordained persons are entering. Rev. Jonathan Smith and Rev. Meg Procopio represented the Orders of Elders and Deacon.