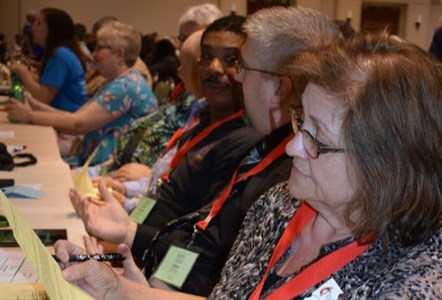 Two policies will be presented and voted upon during the upcoming 2019 South Georgia Annual Conference session, set for June 2-5 in Columbus.

The Foundations For The Future Task Force will present a Disaffiliation Policy outlining a framework to be followed if a congregation votes to leave the South Georgia Conference of The United Methodist Church.

The Pension Liability Proposal, which was prepared by the Conference Board of Pensions, will outline a church’s liabilities if they decide to disaffiliate from the South Georgia Annual Conference.

Both plans will be presented during the Monday, June 3 plenary session and voted upon the next day. The delay in voting is designed to give the conference ample time to consider the proposal in full.

“Since the Taylor Plan has now been ruled constitutional and is now paragraph 2553 in the Book of Discipline, what we will vote on is the way we’ll live into it in South Georgia,” said Rev. Ben Gosden, senior pastor of Trinity United Methodist Church in Savannah and a member of the Foundations For The Future Task Force. “It’s our strategic plan to live into this new paragraph of the Discipline.”

Paragraph 2553, which allows a “gracious exit” for churches to leave the denomination for reasons related to church law on homosexuality, goes into effect immediately in the United States and on Jan. 1, 2021, outside the U.S.

According to paragraph 2553, requirements for exiting churches include payment of apportionments, fair share of pension liabilities, and other obligations. It also requires that the church notify its District Superintendent and call a church conference where a two-thirds majority vote is required to disaffiliate. The legislation also requires the process for exiting the denomination to be completed by the end of 2023, at which time the provisions of the new paragraph expire.

South Georgia’s disaffiliation policy, if approved by the Annual Conference, would set an April 1 deadline in the year in which the local church intends to disaffiliate for church conferences to vote and file their paperwork.

In addition to the “gracious exit plan,” South Georgia’s disaffiliation policy also includes a path for returning if a local church that has disaffiliated decides that it wishes to re-enter the Annual Conference.

“In the vacuum of information, we tend to place our fears, and we wanted to create as much information as possible knowing that we had to be agile and nimble enough to adapt,” Rev. Gosden said. “The work of the Task Force, just like all of our work, was done with a diverse group of people who come down on the issue of human sexuality in a variety of different ways. It was a great collaborative effort that reflects our shared goal – to create the very best future possible for the South Georgia Conference.”

Only churches that choose to disaffiliate under the provisions passed by the General Conference and the South Georgia Conference would be subject to the pension payment provisions outlined in the policy.

The proposed Pension Liability Proposal states that any church that votes to disaffiliate must pay its portion of future pension liabilities plus any pension arrearages that the church has incurred.

“The Conference Board of Pensions considered many different ways we might divide up the pension liability,” said Dr. Derek McAleer, South Georgia’s Director of Administrative Services. “Our paper shares the various ways because we wanted the conference to know there are options. In the end, we thought the most appropriate way was to divide up the liability on the same basis the liability was created. Still, we are willing to be guided by the wisdom of the Conference in this.”

The committee worked hard to balance what is fair and equitable with the promises that were made to the pastors, said Marc Reid, Chair of the Conference Board of Pensions.

“We had to evaluate and balance the promises that were made to our pastors and also be responsible to the people who are paying for those promises, the churches,” he said. “As we considered this as a committee, there was a lot of thoughtful discussion about the entire process, about why it's needed, and then what the equitable allocation would be to those who want to disaffiliate. Not to be punitive, but to be fair.”

Both policies are just recommendations at this stage and are subject to a vote at the 2019 Annual Conference session.

“The Conference Board of Pensions was pleased to recommend a process, but truly believes that this decision should be made by the entire annual conference, and not by the committee,”  Dr. McAleer added.  “We believe the people impacted by the decision should have a say in making it.”

Along with these two petitions, the Annual Conference will also consider standing rules changes, a proposal to explore a mission partnership, and a conference budget for 2020.

Click here for more information, including background information, brief overviews about the disaffiliation and pension liability policies, and video explanations.