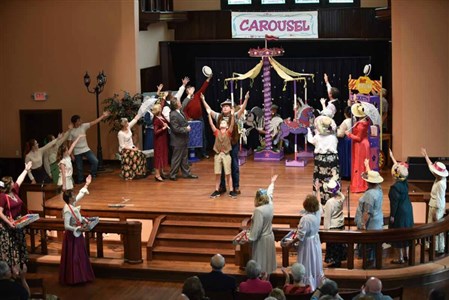 Colorful carousel horses, balloons, and men in masks are more often associated with Broadway stages instead of church chancels, but on Sunday, Oct. 8 worshipers at Asbury Memorial United Methodist Church were treated to a vibrant and powerful musical display during a special worship service.

It’s become an October tradition for the Savannah church to incorporate well-known Broadway numbers into its services. Liturgy, scripture, and a sermon are woven among harmonies and high notes during the church’s annual God on Broadway series, now in its 13th year.

Every Sunday in October since 2005 Rev. Billy Hester and his creative and talented congregation have combined sermons and songs with Broadway themes, bringing God’s word to life in new and innovative ways.

“These sometimes help us talk about issues that can be tough to talk about. (The songs and themes) open a door for that,” Rev. Hester said. “People might think they’re kind of soft services, but they’re actually some of our more profound and deep services.”

This season, songs from Pippen, Carousel, and Wicked have been performed, and the series will continue with Aladdin on Oct. 22 and close with Joseph and the Amazing Technicolor Dreamcoat on Oct. 29.

Rev. Hester and his wife, Cheri, met doing theater in New York City and were later cast opposite each other in Pippin. They share a love and passion for the arts, the Church, and their faith in Christ.

“It’s all kind of come together in this series,” he said.

Asbury Memorial UMC has about 250 regular attendees each Sunday but the pews are packed during the God on Broadway series, with more than 500 people attending worship services in October.

“This is a great tool for reaching those who wouldn’t normally go into a church,” Rev. Hester said. “We get lots and lots and lots of visitors.”

The series wasn’t designed just to attract visitors or to highlight the congregation’s vast artistic abilities, he said. He wanted to help people see God working in all areas of their lives, not just while they were sitting in church on Sunday mornings.

“There’s theology in everything we see,” he said. “I wanted to get people thinking about how God is working in life. You don’t have to just quote scripture for God to be involved, and it doesn’t have to have ‘church’ at the end of a sentence for God to be part of it.”