Beauty from the storm 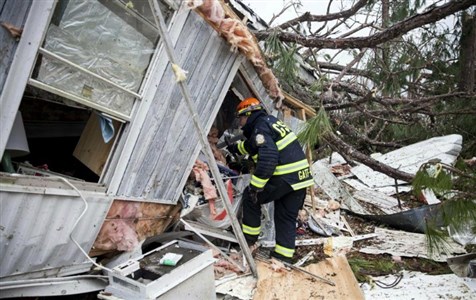 A rescue worker enters a hole in the back of a mobile home Monday, Jan. 23, 2017, in Big Pine Estates that was damaged by a tornado, in Albany, Ga. Fire and rescue crews were searching through the debris, looking for people who might have become trapped when the storm came through. This is the same mobile home park where Heraldo Vicente, lay pastor of El Faro, saved the lives of so many members of the congregation who lived there. (AP Photo/Branden Camp)
1/22/2018

When storms ripped through the Southwest and South Central Districts last January, all members of Albany’s El Faro congregation were impacted by the storms in some way, with several families losing everything, including their homes and vehicles.

But in the year since the tornadoes brought such devastation to the community, there is hope. The church, a Hispanic United Methodist congregation, is growing and vital, says Rev. David Diaz, who serves both El Faro and the Bainbridge Hispanic Mission.

The Albany community, which served each other so well after the storms, has become even more united in the past year, Rev. Diaz said. Their shared experiences and faith in Christ have helped forge bonds that won’t easily be broken, he said.

“There is unity among the congregation and community. There is more and more of a connection. It is great.”

While the storms left much of the city in ruins, great friendships, a sense of trust, and exciting partnerships were forged among members of several United Methodist congregations, said Laura Haygood, a member of Albany First United Methodist Church.

After the second set of storms hit the El Faro community so hard, those same congregations responded immediately to help. Albany First UMC turned their gymnasium into a shelter and housed El Faro members who were displaced by the storm. Porterfield UMC, through their Loads of Love ministry, laundered members’ clothing and bedding for several days. Other area churches provided donated goods, meals, and other needed assistance.

“We are sister churches and we care and support one another,” Haygood said. “It has been fun to open our eyes and to get to know other brothers and sisters in Christ.”

Experiencing the generosity of the community, the Conference, and God has been overwhelming, Haygood said. More than $100,000 in donations, earmarked for El Faro and storm recovery, was given to the church. That’s in addition to the furniture, food, clothing, and other items donated by people from all over the country.

Out of that abundance the El Faro congregation’s needs were met, other local families were helped, and Albany First UMC was able to send money to Texas to help with Hurricane Harvey relief efforts.

Vitality, growth, baptisms, weddings, unity, and friendships. Rev. Diaz says he has an overwhelming sense of gratitude for the love, prayers, and support.

As she looks back over the year, Haygood sees God’s hand in all that’s happened.

“What man makes for evil God used for good,” she said. “We see the amazing, beautiful relationships that have formed because of this. It brought more people to church and helped people realize our need for God. God has been at work and has used this for His glory.”