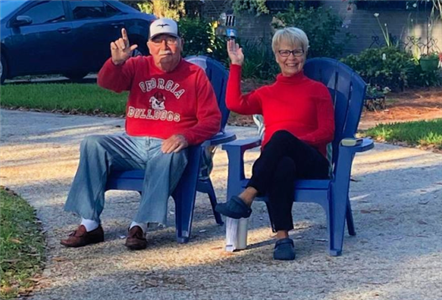 Nearly every weekday, from August 2021 through May 2022, a “cute little old couple” sat in their front yard in a pair of green Adirondack chairs, drinking coffee and waving at passersby.

Cars, buses, construction vehicles, and landscape trucks would slow as they drove past, honk, wave, and smile.

What started as a one-day sendoff to middle school for grandson Jax grew into something much bigger than Janie and Fred Alexander ever imagined.

“This is just a way to spread joy and love every day,” said lifelong United Methodist Janie Alexander. “We’re overwhelmed. We’re the ones being blessed.”

No matter the weather, the Alexanders were out on their front lawn, waving, smiling, and letting folks know they’re loved. They sat under umbrellas when it rained and huddled under blankets when it was cold.

The two became so familiar that children sometimes would say hello to Janie when she was out running errands around town.

“One boy was so shy at the beginning of the year and by the end of the year he’d hang out the window and wave,” Janie said. “I introduced myself at a restaurant to another boy and he said, ‘I know you; I wave at you every day!’”

On the rare occasion the Alexanders couldn’t make it out to wave, they were missed and people would ask their daughters where they were.

“I had to put a sign out if we weren’t going to be there so no one would get worried or think we’d died,” Janie laughed.

To the Alexanders, what started as a simple good-morning wave to a grandson on his first day of middle school has grown into so much more. It’s a ministry of sorts now, a simple way to share the love of Christ each morning.

“People stop and tell us it makes their day. It’s really humbling. It’s just been a joy. People come up and say they’re so blessed by us doing this.”

And folks who stop and talk to Janie, Fred, or one of their “tribe” – they have five children, 10 grandchildren, and six great-grandchildren – likely receive a small, square prayer stone with a scripture inscribed on it. Janie carries several with her everywhere she goes and hands them out to grocery store cashiers, wait staff, fast food employees, and anyone else she thinks needs a little encouragement or hope.

“We’ve had people open up to us and share with us,” she said. “They open a lot of doors to pray for people and start relationships.”

But the joy and love they share knows no denomination. They wave at everyone who drives by these days, and they don’t plan to stop. They’ve taken a break for the summer, but come August, they’ll be back out front, waving to middle school students and their families (Glynn Middle School is just down the road from their home) and everyone else who happens to drive past. Janie says she and Fred have started something they can’t stop.

“It’s heartwarming that it means so much to them. It was a blessing to us that these kids are sweet enough to go by and wave to these little old people out there drinking their coffee.”