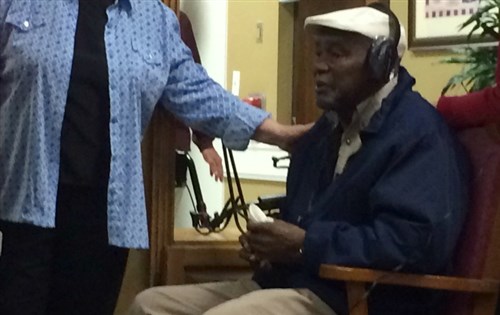 Rufus Jones, a resident of Blair House Senior Living Community, a senior living facility in Macon, became emotional when he first heard rhythm and blues and soul music on his new iPod.

There’s something about music that can instantly change a mood or transport a person to another place and time, rekindling memories long forgotten.

There’s also evidence that music helps people suffering from dementia. As theologian Dietrich Bonhoeffer said, “Music . . . in time of care and sorrow, will keep a fountain of joy alive in you.”

Rufus Jones, a resident of Blair House Senior Living Community, a senior living facility in Macon, is a former musician who played with the likes of Otis Redding, James Brown, and others of that era. He cried when recently given an iPod shuffle filled with soul and rhythm and blues music.

A patient in Blair House’s Memory Care Unit, Jones received the iPod as part of Centenary United Methodist Church’s Music and Memory Project, a ministry that provided the music players and 20 songs free of charge to each of the unit’s 40 residents.

“He truly came alive when he heard it,” said Caroline Nickel, one of the Music and Memory Program’s founders. “He smiled, cried, and chatted about his days as a musician. He was very happy.”

Nickel and her friend and fellow Centenary UMC member Yvonne Stuart were inspired by “Alive Inside,” a documentary about music, memory, and the power of music therapy.

Retired educators who love music, both Nickel and Stuart are passionate about serving their community and saw the Music and Memory Project as a way to help others.

“Music is the last part of our memory to fade – it survives the longest of our memories, neurologically,” Nickel said. “When I watched this video I could picture myself in who knows how many years … I can imagine that being able to hear the music I feel so passionate about would still be an inspiration for me. I could see myself in that movie. That’s why it became so meaningful.”

The project resonated with Stuart because she has a dear and longtime friend with Alzheimer’s disease.

“It’s been the most tragic thing to watch someone … go down this road,” she said. “That’s why it’s important to me.”

With the support of Centenary UMC’s leadership, congregation, and the Macon community, Nickel and Stuart raised more than $6,000. People donated iPods, iTunes gift cards, and money, and two generous grants rounded out the fundraising.

“When we went into the project we thought it would be easy to raise this amount of money, but it was not,” Stuart said. “But then things turned around and all of a sudden we had the resources we needed to complete the project. I saw God’s provision through the giving.”

Onto each iPod students from nearby Wesleyan College helped create and load 20-song playlists, personalized for each resident. Learning about legendary artists like Roy Acuff, Gene Autry, Frank Sinatra, Bing Crosby, Lawrence Welk, Louis Armstrong, and other musicians from the early 20th century taught them a lesson in music history, Nickel said with a chuckle.

Studies show that music helps cut down on anxiety, restlessness, agitation, and pain, Nickel said, helping patients, families, nurses, aides, and others cope with the realities of dementia, Alzheimer’s disease, and other ailments.

“(Music) does not cure anything, but it certainly gives some life back to those people who seem to be gone,” she said. “It’s amazing.”