At the Table: Conversations with the Bishop, Hospitality & Virtual Tools Trainings 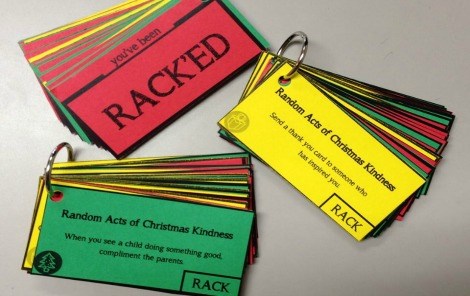 Shonda Betts walked into her local grocery store last week to buy sour cream and cheese. What she got – and gave – though, was so much more.

Betts, a member of The Chapel, a United Methodist congregation in Brunswick, is participating in the church’s Random Acts of Christmas Kindness (RACK) series. Each day, she and her family choose to do one random act of kindness for someone else.

Standing in the checkout line that day, Betts felt God calling her to pay for the groceries of the person standing behind her.

Even with her gregarious and outgoing personality, she was hesitant and nervous as she turned around to speak.

“I was so scared … it was so hard, and I said really fast, ‘Sir, our church is doing random acts of Christmas kindness and I want to pay for your groceries,’” Betts said.

The man thanked her, but said that he could pay for them himself and suggested that she make the offer to someone else.

“I was like, ‘God, you are not making me say this twice! My heart was beating so fast.”

The next person in line was a young woman with a baby. She and Betts were in the express lane, and in her cart were just a few items. It looked to Betts as though she was buying only exactly what she needed and nothing more. This time, when Betts offered to pay for her groceries, the woman accepted. Betts also invited her to The Chapel’s Christmas Eve services.

“I feel like it was a big step of faith for me, because when you pay for someone’s coffee behind you at Starbucks you don’t have to see them,” Betts said. “I was shaking – it was hard! Maybe God was telling me to be more gracious when He offers to help me and to just accept it.”

On the first day of Advent, Sunday, Dec. 1, The Chapel launched their RACK campaign and gave each person or family a set of 25 RACK cards. On each card – one for every day of Advent – a random act of kindness idea is printed.

Some are easy, such as putting a donation in a Salvation Army kettle or smiling at 10 strangers. Others are more difficult, such as inviting someone to spend Christmas Eve or Christmas Day with your family.

The one thing all 25 RACK ideas have in common, though, is that they give people opportunities to show their thankfulness, generosity and love.
The idea for the RACK project came after leaders had planned and formalized the church’s financial sermon series, which was taught just prior to Advent.

“After going through our FLIP generosity campaign, we realized that we wanted to show people that generosity is more than just tithing and is more than just financial, but it’s also being generous with the things that you do,” said Anne Bosarge, The Chapel’s director of discipleship. “It’s kind of a state of mind and not just a financial decision.”

The Chapel’s congregation is very generous, she said, and giving them creative ideas to express that generosity met a need they really responded to.

“We are a congregation that likes to get in there and get our hands dirty. And we love a project, we love the community that is created by everybody doing the same thing,” Bosarge said.

As part of their “Welcoming God” Advent sermon series, Statesboro’s Pittman Park United Methodist Church launched their own RACK effort.
The daily, random acts of kindness are specific, tangible ways congregants can welcome God into the world and prepare for the celebration of Christ’s birth.

“Part of what we’re doing during Advent is looking forward to Christ’s return as we look back at Christ’s entry into the world,” said Rev. Jonathan Smith, Pittman Park UMC’s associate pastor. “So this is one of the ways we’re bringing God’s kingdom on earth as is it in heaven. We’re really trying to embody that as we move through Advent.”

Pittman Park UMC’s RACK booklets contain daily activities and ideas and space to write what God taught or revealed through the RACK.

“We are asking people to intentionally reflect on what they’re doing and how they’re preparing their hearts and lives for Christ,” Rev. Smith said. “We’re not talking about traditional things (during our Advent sermon series); we’re talking about repentance, preparation, who to believe, and what it means for Christ to enter into our world and for us to be in the world as well. So we’re trying to tie together those ideas of preparation with the RACKs as a way to embody the call to prepare the way.”

Both Bosarge and Rev. Smith hope that the RACK activities will help church members live out their faith in their daily lives.

At Pittman Park UMC, the RACKs and the “Welcoming God” Advent sermon series are kicking off the church’s “Drive it Home” ministry model, which is a new idea the church will further implement in 2014.

“What we’re aiming for with the Drive it Home concept is to give (congregants) a way to carry home the message from Sunday morning into their everyday lives,” Rev. Smith said. “This was a logical entry into the Drive it Home model and fit well with our Advent theme.”

Small, unexpected gifts of love or acts of service can have lasting results, Bosarge said.

“Hopefully, going forward and after Advent, people will continue to think about the small things that they can do to be generous and to show kindness to others in our community and continue that throughout the year,” she said. “Little tiny things can mean a lot and have a big impact in the life of somebody else.”