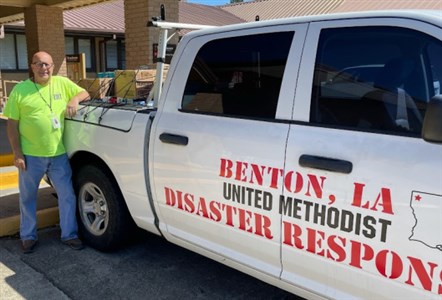 Whether pressure washing sidewalks at Dooley Campground, setting up a collection and distribution warehouse after a catastrophic hurricane, or clearing limbs after a tornado, Bob Grieco is a helper.

“I want to help, so that’s what I do. I’m pretty good at organizing things and I feel like I’m helping people,” said Grieco, who serves as South Georgia’s assistant disaster response coordinator.

That’s why Grieco, an Air Force and Army National Guard veteran, drove through the night to Baton Rouge, La. after Hurricane Ida tore through the southern part of the state. After spending the night in his Jeep, for two weeks he helped set up and run the relief supply distribution center at Broadmoor United Methodist Church.

When supplies came in, he made sure they were logged, organized, and then sent where they were most needed.

“I see God every time one of these trailers goes out and one comes in,” Grieco said. “I see God in the faces of the people we help.”

“When you’re in the military you’re serving people,” Greico said.

Upon retiring from the Army National Guard in 2008, Grieco joined Team Rubicon, an international non-government organization that utilizes the skills and experiences of military veterans with first responders to rapidly deploy emergency response teams.

When Grieco learned The United Methodist Church has its own Early Response Teams, he took the class and became certified.

A member of Pinehurst United Methodist Church, Grieco views his disaster response service as a labor of love and an extension of his faith.

“What drives me to do what I do, to work the long hours, to make sure the job gets done, to sleep on a cot or in the back of my Jeep like I’ve done, is knowing that our faith in God is touching people and that God is leading us to the people who need to be helped,” he said.

Grieco’s expertise is recognized across the jurisdiction, said Conference Disaster Response Coordinator Luis Morales. “He had no qualms in responding to the call from the Louisiana Conference. He not only helped with post-hurricane damage assessment and helped set up a distribution center, but he also joined a chainsaw team to clear some debris. I am so proud of how Bob represents South Georgia’s disaster response team.”

God has placed him in this role, Grieco said, to help the South Georgia Conference and those who have suffered losses.

“God drives me to do what I do. He put me here, he put me in this ministry. He has a reason and that’s why I’m doing this,” he said. “The number one reason I do this is because I love the people we’re helping. God sent us to help them and God loves them. That’s why I do this and that’s why I’ll continue doing this until I can’t anymore.”