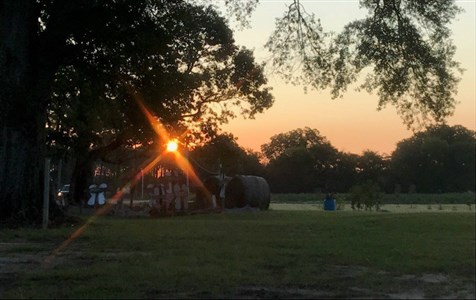 Midway United Methodist Church is in the heart of Cordele, the self-proclaimed Watermelon Capital of the World.

With deep agricultural roots, it makes sense that the church’s congregation, pastored by a former farmer, would begin a food and gleaning ministry in the acre-and-a-half field that sits next to the church.

What they didn’t necessarily expect, however, was how the small church would blossom right alongside the crops.

What started as a pumpkin patch several years ago now is a field full of 37 fruit trees and too many tomato, loofah, squash, sweet potato, watermelon, and strawberry crops to count.

The crops, planted - as an old wives’ tale dictates - on Good Friday, are harvested and given to Rev. Ed Eschmann to share with neighbors during his house calls. Additional fruits and vegetables are shared with senior citizens in the community.

“I farmed for 20 years; it gets in your blood,” Rev. Eschmann said. “This is an agricultural community, so the appointment is a good fit for me. The food and produce goes mostly to seniors in the community. It gives us a way to visit and get to know people.”

As Rev. Eschmann meets neighbors and delivers fresh fruit and vegetables to those he visits, he builds friendships and relationships and invites them to worship services and the church’s monthly suppers.

As the crops have grown, so has the congregation. In just the past few months, they’ve welcomed seven new members. They have also seen dozens of new faces at their monthly community dinner, held on the third Friday of each month.

“They saw us reaching out to the community and came,” Rev. Eschmann said.

Gardening and tending the crops have also brought the small congregation together, said Janis Summers, whose family owns the field. They loan the land to the church, and farming this small plot of fruit trees and crops has become her passion.

“It was truly an inspiration from God,” said Summers, a self-professed former city girl (she moved from Marietta a few years after marrying husband, Carden). “I just felt like I had to do it; it wouldn’t let go.”

Rev. Eschmann originally wanted to plant watermelons, but found out “they’re so plentiful in the county they can’t be given away,” so pumpkins were initially planted. After one fun but labor-intensive season planting and tending pumpkins, the congregation decided that low-maintenance fruit trees and vegetables would be a better idea.

Summers researched fruit trees that can thrive without much tending, and now the field has pear, plum, fig, loquat, and Japanese persimmon trees. With a cross and a bench under the old oak trees, the “Fruits of the Spirit Orchard” has also become a quiet retreat, a refuge and place of solitude for many in the congregation and community.

“It’s unified our little neighborhood and our congregation,” she said. “It’s a way to minister to people and invite them in.”