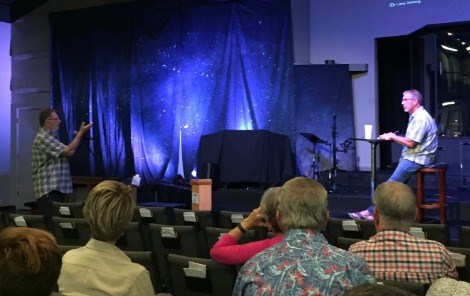 An opportunity for South Georgia clergy and laity to share their thoughts and take part in the Way Forward conversation, the listening post was hosted by Rev. Jay Hanson, a member of the delegation and lead pastor of The Chapel Ministries in Brunswick.

Rev. Hanson did not make a presentation or answer questions, but was present to listen to everyone who wished to speak. Other delegation members had planned to attend, but were unable to travel due to Hurricane Michael’s impact on the conference.

“We want today to be primarily about listening,” Rev. Hanson said as he opened the session before praying for those affected by Hurricane Michael.

Those gathered were respectful and attentive as 14 people spoke and shared their views.

A large group of pastors and lay members of Asbury Memorial United Methodist Church in Savannah made the trip to Brunswick to voice their opinions on the three main legislative options that emerged from the Commission on a Way Forward’s work with the Council of Bishops and are scheduled to be on the agenda as legislation during the special called 2019 General Conference in St. Louis.

“Myself and others, particularly in our congregation, feel that the One Church model would be a little bit better for United Methodists as a whole,” said Bill Jahn, a member of Asbury Memorial UMC in Savannah, after the session. “We came here in order to provide feedback and our testimony to what a diverse and a welcoming church has meant to us.”

“We have to have a voice, and my hope is that the process will, through having lay and clergy speak directly with our delegation, create a greater sense of trust that they do represent us,” he said after the session. “Whatever product comes out, if we feel like God has been in the process, we can trust it a little bit more.”

The listening posts are important, Rev. Hanson said, because it’s critical to listen and relate to one another respectfully even in the midst of disagreement.

“As a denomination, we have some very important decisions to make,” he said. “We obviously want to do the right thing, but we also want to do it the right way. How we do what we do may be as important as what we do. It can certainly be risky and a bit scary to give people a microphone and let them say whatever they want, but I think today we saw that it can also be helpful. We all want to be heard. To be peacemakers doesn’t mean we forfeit our stance or dilute our beliefs, but it does mean we allow everyone to be heard.”