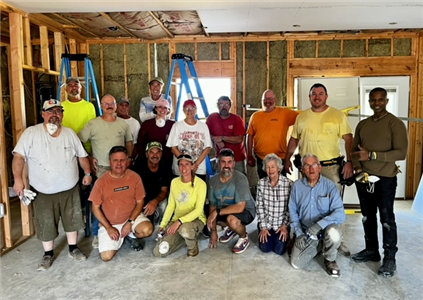 When disaster strikes, United Methodists have a long legacy of being present to help their neighbors and communities from day one until the very last nail is put in place. At the core of this legacy is the connectional nature of The United Methodist Church.

The tornado, which was on the ground for nearly three hours tracking 165 miles, caused massive destruction not just to Mayfield but also to surrounding communities. As many as 80 people died as a result of the storm. Three churches were destroyed, including Mayfield First United Methodist Church, and over 600 homes were destroyed in Mayfield (Graves County) alone.

The devastation was immeasurable, and Scott Cleaveland, member of Wesley Monumental UMC, knew “through the hallmark connectionalism of The United Methodist Church” there was more the church could do. He began praying about and planning a trip to Mayfield.

On August 22, 2022, Cleaveland’s planning came to life as he led a team of 16 volunteers from 7 United Methodist Churches in the Coastal District - Goshen, Rincon, Clyo/Silver Hill, Richmond Hill, Waynesboro, Trinity, and Wesley Monumental - plus a neighboring Brunswick congregation, The Chapel. The team spent four days fully insulating and putting up sheetrock at the home of an elderly veteran and his daughter who sought refuge in their hallway as their home was obliterated during the tornado.

“Laying hands on the house, praying for the success and safety of the project, as well as healing and wholeness for the family and community were integral to the work week,” said Cleaveland.

Team members led morning devotions and two Coastal District pastors, Rev. Michael Finn and Rev. Nick Pumfrey, led worship each evening. Standing on the empty lot that was once Mayfield First UMC, the team prayed for the future of the congregation.

“At a time when so much of our denomination is focused on dividing, it was good to unite in service to others,” said Cleaveland. “When it came down to it, we were the same hands and heart of Christ in a tornado ravaged community.”

Cleveland was thankful for the support of the connectional structure as he prepared for the trip. Kelly Crane, Coastal District Disaster Response Coordinator and member of Trinity UMC in Savannah, organized the construction aspects of the trip. Rev. Shannon Baxter, Conference UMVIM coordinator and associate pastor at Isle of Hope UMC in Savannah, coordinated UMVIM insurance for the group. Rev. David Thompson, Coastal District Superintendent, and the Coastal District Missions Committee sent $10,000 towards the cost of reconstruction. Graves County UMC (Kentucky) provided the team with accommodations and generously fed them each night.

Crane has been on numerous disaster response trips but knew there was something special about this team, most of whom were meeting each other for the first time.

“From the moment we all arrived at our host church it felt like I was with family,” said Crane. “We all came from different backgrounds and different areas of the conference, but we all came together to insulate and sheetrock an entire home.

“I know God has his hands on our work as we all laughed together, cried together, and prayed for this homeowner and community. Being part of something that is so much bigger than any one person is truly inspiring and humbling.”

Being called to serve may not be convenient or easy, explained Crane, but it is what sets Christians apart.

“All you need to do is be a caring Christian presence,” said Crane. “The rest is easy.”

Cleaveland says they are already considering plans to return to eastern Kentucky in 2023 where the devastation of flooding has been just as substantial and will take as long to assess and reconstruct. If you are interested in being part of a disaster response team to Kentucky, contact Cleaveland for further details msctclv@gmail.com.