Earthquake in Haiti: UMCOR’s response and how you can help 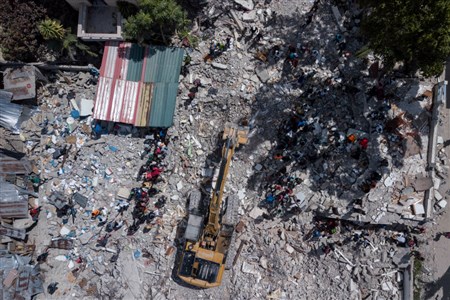 On Saturday, August 14, 2021, a 7.2 magnitude earthquake produced widespread destruction in the western region of Haiti.

As of August 20, more than 2,200 are dead and 12,000 injured, while hundreds more are still missing. According to Haitian Civil Protection, more than 37,300 homes have been destroyed and 46,000 have sustained damages, leaving thousands homeless.

Several hospitals have been damaged or destroyed, while those still operating are completely overwhelmed, lacking sufficient personnel and medical supplies.

“In the aftermath of the earthquake, we grieve alongside the people of Haiti as the staggering loss of life and level of devastation becomes clear,” says Roland Fernandes, general secretary of Global Ministries and UMCOR. “UMCOR stands firm in its commitment to alleviate suffering and is working with partners on how to best meet basic and immediate needs as it has done in the past.”

UMCOR is in communication with partners in Haiti and working closely with them to support emergency relief and early response efforts.

UMCOR has awarded a grant to the Église Méthodiste d’Haiti (Methodist Church in Haiti). In coordination with local doctors and nurses, the funds will supply two medical clinics in Gebeau and Les Cayes with emergency supplies including PPE, bandages, gauze, IV fluids, and antibiotics.

UMCOR has awarded a grant to Service Chrétien d’Haiti (SCH). The funds will supply the Les Cayes General Hospital with emergency supplies including PPE, bandages, gauze, IV fluids and antibiotics.

Make a gift to support the work of international disaster response.