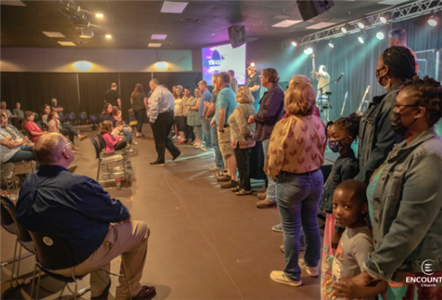 On Sunday morning, April 3, 2022, 87 people gathered to worship and celebrate Encounter Church’s founding and constitution into The United Methodist Church.

The mood in the room was expectant and excited as those gathered anticipated an announcement that had for several weeks been teased during worship services and via social media.

Preaching on 1 Kings 8 which tells of Solomon dedicating the temple, pastor Damon Hubert told the congregation its purpose is to point people to Christ.

“That’s what we were designed for. Now that temple is you. That temple is us,” he said. “Everything we do points to God. That’s the point of us as the new temple. Our purpose is to reach the world. That is the most important thing.”

And just as Solomon’s temple was a big deal, Hubert’s big announcement to those gathered was that the church was being formally founded and constituted as a new United Methodist congregation.

But as the peak of the coronavirus pandemic began to wind down and the Effingham congregation was able to gather in person again, it became important to strike out on their own, said pastor Damon Hubert.

“The Chapel was phenomenal, but when you’re part of something local you have more ownership, you have more of a feel of the direct results of your ministry,” Hubert said. “We are grateful for The Chapel and everything they’ve done, but we wanted to give the opportunity for our local people to have ownership of the ministry we do here.”

Hubert gave thanks to Coastal District Superintendent Rev. David Thompson for his leadership and guidance throughout the process.

“What an exciting time,” Rev. Thompson said about the day. “Constituting a new church is a complete and total blessing.”