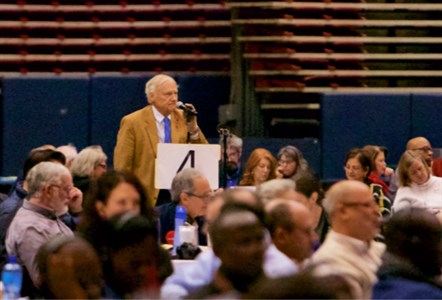 Much of the morning focused on discussion and debate surrounding the Traditional Plan. After several hours, multiple amendments, and an effort to postpone a vote on the plan until the end of the day, an amended Traditional Plan was approved by the legislative committee and will be voted upon by the General Conference tomorrow. The vote was 461 (56.22%) to forward to the plenary tomorrow and 359 (43.78%) against.

Other items considered by the legislative committee were two disaffiliation petitions, or “gracious exit plans.” They will be considered by the plenary tomorrow. The two plans would allow churches, with certain limitations, to leave the denomination with their property.

The votes mean that, along with two pension petitions and two disaffiliation petitions, the Traditional Plan is the only plan guaranteed to go to plenary Feb. 26. {Read a more in-depth report of the day from UMNS here.}

Delegates will begin tomorrow morning at 9 a.m. EST with worship and then meet as the plenary.