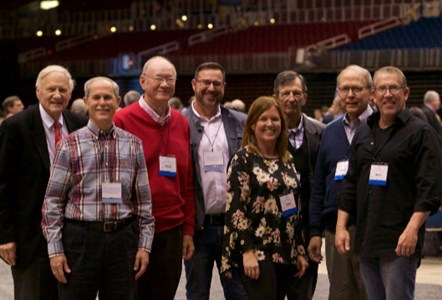 After a day of prayer and worship, day two of the special called session of General Conference focused on the business side of things.

The morning began with the 864 delegates hearing a report from the Commission on a Way Forward, and the afternoon was spent prioritizing and organizing the business of the conference.

While no decisions will be made until Tuesday, priorities were established so that work and decisions can be more streamlined and efficient in the coming days.

During the afternoon session, delegates voted on 23 legislative packages and ranked them either high or low priority. This was a process developed by the Commission on General Conference to determine the order in which legislative proposals will be considered. Some of the legislative packages involve multiple petitions; others were petitions that can stand alone. Each petition changes part of the “Book of Discipline.”

The rankings were displayed after all the plans and petitions had received a vote. Petitions addressing pensions and the Traditional Plan topped the list of priorities for what General Conference delegates will work on in their legislative committee. The Traditional Plan emerged as a high-priority item to 55 percent of delegates and will be discussed in front of the entire body Monday morning. The One Church Plan was fifth behind legislation that deals with disaffiliating churches. (Read UMNS story for rankings of petitions)

“The process so far has allowed everybody to indicate where their high-priority items are,” Bishop R. Lawson Bryan said in a video. “Every petition will be considered at some point, but the process is allowing us to begin with those items that are of most interest to most of the delegates.”

“Prayer really matters,” he said. “Prayer is how we do our work. Keep praying and know that that is part of the work. You are participating in our work by your prayers.”