The United Methodist Church’s top legislative body is meeting at the Oregon Convention Center, the largest convention center in the Pacific Northwest, from May 10-20, 2016.

General Conference is the top policy-making body of The United Methodist Church which convenes once every four years.The conference can revise church law, as well as adopt resolutions on current moral, social, public policy and economic issues. It also approves plans and budgets for church-wide programs. 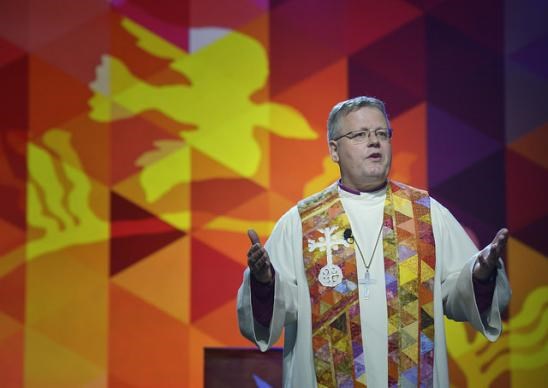 Bishop Christian Alsted preaches on May 12 during the United Methodist General Conference in Portland, Ore. Photo by Paul Jeffrey, UMNS.

(UMNS) Bishop Christian Alsted challenged those attending General Conference 2016 to offer themselves humbly and in full to Jesus’ authority, as did a Roman centurion described in the New Testament.

Alsted, of the Nordic and Baltic Episcopal Area, said he joins other United Methodists in wanting growth and renewed vitality for the denomination.

“But in the midst of all my purposefulness and busyness, I may just overlook what became painfully obvious to a pagan centurion,” said Alsted.

“The starting point of all transformation is to humbly and wholeheartedly submit myself to the wounded healer Jesus Christ and to unconditionally depend on him for the healing of the church.” Read more

Plenary Session: Rule 44 does not pass 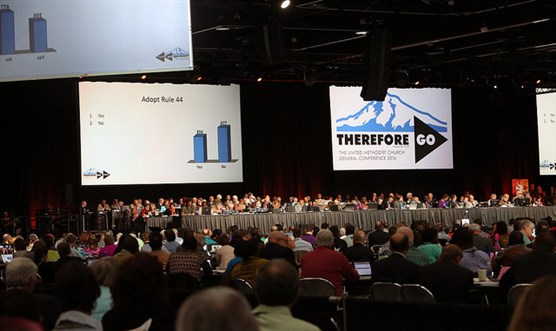 The Thursday morning vote on Rule 44 fails to pass at the 2016 United Methodist General Conference in Portland, Ore. Photo by Kathleen Barry, UMNS

On Thursday morning delegates returned to discussion on the alternative legislative discernment process known as Rule 44. After much discussion, delegates voted against Rule 44 with a vote of 355 for (43%) and 477 against (57%).

The Rule has been before the body since they began ordering their work on Tuesday, May 10, when the 2016 General Conference delegates adopted all other rules recommended by the commission that plans The United Methodist Church’s legislative gathering.

Rule 44 was put forth by the commission as an alternative Discernment Process that might provide a template for dealing with contentious issues in the life of the church.

Because amendments were made on Wednesday, Rule 44 was sent back to the Rules Committee. Rule 44 came back to the body this morning with no amendments recommended. 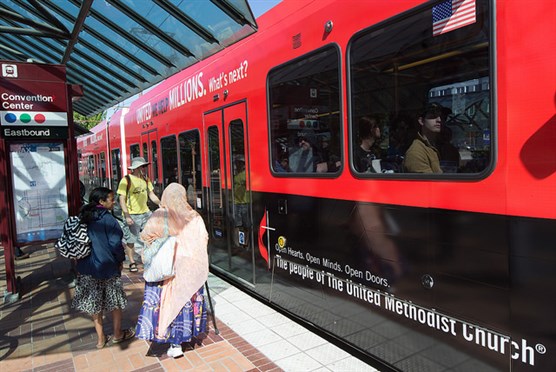 Passengers boarding the red line of the MAX light rail train in Portland, Oregon are greeted with an advertising message from The United Methodist Church, "United we help millions. What's Next?"

(UMNS) Bishop Kenneth Carter was set to undergo surgery for a severed tendon on the afternoon of May 12 at Portland's Legacy Emanuel Medical Center. The Florida Conference episcopal leader fell in the plenary hall of General Conference here Tuesday, May 10, injuring his left knee badly enough that he required a wheelchair. Read more

Join us in Prayer 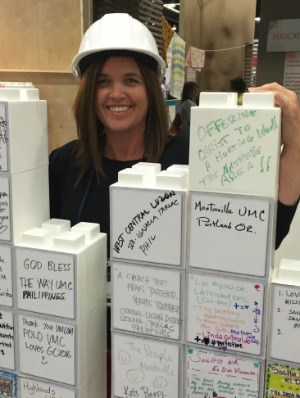 I am not afraid that the people called Methodists should ever cease to exist either in Europe or America. But I am afraid lest they should only exist as a dead sect, having the form of religion without the power. (John Wesley)

“Father, we give thanks and praise for the many ways that you are at work both in us and through us as we gather together from near and far as the Body of Christ - your church - the global United Methodist Church. How awesome it is to remember that all along you have been preparing the way and preparing our hearts, minds, souls, and giving us strength for the work of your kingdom. You are presently walking alongside us and, just as important, your love, steadfastness, and faithfulness will be with us after all is said and done. Give us your guidance, discernment, and wisdom to hear your voice and to look to your will - not ours. I pray that your Spirit will multiply your grace, love, and joy to abound through each of us as we engage in the work of the church and celebrate the impact and outreach Methodism has in the transformation of this world! May YOU be glorified through the work and ministry at hand, and let the revival and movement arise once again, as there is so much more work to be done here on earth! Amen.”
-Allison Lindsey

Schedule for Friday, May 13

Friday afternoon delegates will be in legislative committees (no live streaming).

See the Advance Daily Christian Advocate, which contains all of the legislation submitted for consideration by the delegates.