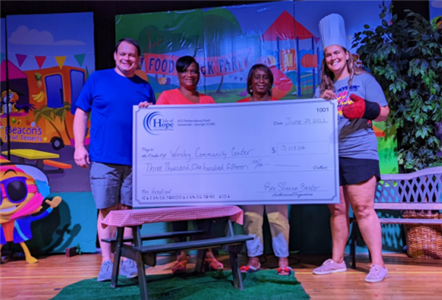 Mission work – serving the least, the last, and the lost – is integral to the Isle of Hope United Methodist Church congregation.

Whether youth, children, women, or men – all ministry groups are encouraged to be involved in missions.

Vacation Bible School is no exception, and the 200 children and 80 volunteers who attended the church’s recent VBS, held June 20-23, raised a total of $3,115 for Wesley Community Centers, Inc. in Savannah. The children raised more than $1,800 themselves and Isle of Hope UMC’s United Women in Faith chapter raised $1,200.

“It was pretty amazing,” said Rev. Shannon Baxter, Isle of Hope UMC’s Minister of Missions and Outreach. For years the congregation has set a goal to be a 50-50 church, giving as much to missions as it spends on its regular operating budget. Encouraging and teaching children and youth to think similarly is part of the church’s Christian formation and education program.

“This helps everyone realize who we are as a church and what we feel is important,” he said. “It’s wonderful to see (our children) growing up into that and even making that a part of their own faith. That’s the ultimate goal.”

The children were enthusiastic about raising money, said Chrissy Ruehl, Isle of Hope UMC’s Minister of Children and Families. They raided piggy banks; did extra chores; checked under sofa cushions; asked parents, grandparents, and neighbors to contribute, and even set up lemonade stands to earn extra money.

Piggybacking on this year’s VBS theme, “Food Truck Party,” Ruehl and other VBS volunteers used scripture and Bible stories to teach children about food and also taught them practical, real-world examples of how to help others with food. In addition to raising more than $3,000, the children made to-go bags full of fruit, granola bars, socks, tissues, and other necessities. They were given to Wesley Community Centers and others who work with Savannah’s homeless population.

“While we want to talk about God and teach really good theology, we also want to emphasize that being a Christian is so much more than knowing your Bible, it’s really living out the Bible stories,” Ruehl said.