Lessons from Dorian: Communication and connection are critical 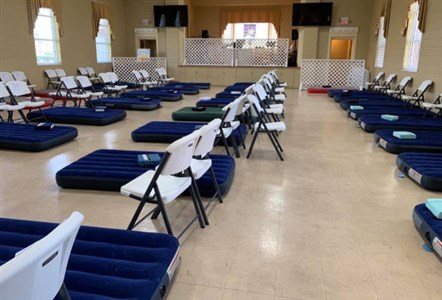 Even though Hurricane Dorian didn’t impact Georgia’s coast as originally forecast, South Georgia United Methodist congregations and ministries responded before and after the storm to help those whose lives were affected.

In the days leading up to Hurricane Dorian’s eventual East Coast landfall, no one was sure exactly where the storm would hit, but those in the Coastal District prepared for the worst.

Rev. Thompson, who evacuated to Cordele with his family, spoke with each pastor in the evacuation zone. He was impressed with the level of communication taking place between and among the pastors and their congregations.

“They had already done some form of communication, either by email or by phone tree,” Rev. Thompson said. “They had passed the word through the congregation to evacuate and to check on those who needed help.”

“There was a tremendous amount of communication going on beforehand and afterwards,” he said. “That kind of communication up front builds confidence for people when we don’t know what’s going to happen.”

What did happen, at least along Georgia’s coast, was mostly just rain and wind, but what Hurricane Dorian highlighted here is that that the conference is prepared for those storms that do cause more damage.

The South Georgia Conference is the best prepared it’s been in more than a decade, Morales said. Since October 2016, more than 350 South Georgia United Methodists have received Early Response Team (ERT) Training. Three years ago, the conference had just one formal ERT team and one UMCOR-trained instructor; today there are five teams with two in the works and five instructors.

“I am proud of the capacity our conference has built since 2016 when Hurricane Matthew visited us,” Morales said. “I am thankful for the ERTs, our recently assigned district disaster coordinators, our ERT instructors, and for our conference staff’s support. I pray that we don’t get hit by any natural disasters like hurricanes or tornadoes, but we are ready should it happen in South Georgia.”

Being connected to one another at the local, district, and conference level and having access to quick, rapid communication were critical, too, Rev. Thompson said. Having those systems already in place before a storm hits is key to deployment of resources and making sure needs are met.

“It was a blessing to watch how established and ready we were because the connection was there,” he said. “We had the connection already … had we had to create that or start that in the midst of the event I’m not sure things would have ever played out like they did. But because we were connected and because we were very used to communicating with each other, it really flowed. It just did what it was supposed to do at its best, which was really a blessing to watch and be involved with.”

He was also struck by the number of calls, emails, and texts he got from people who wanted to help. Morgans Chapel United Methodist Church, a Coastal District congregation in Townsend, was one of them. The small congregation of about 100 people collected more than $5,000 in a love offering to help the recovery efforts in the Bahamas.

“That’s the power of the connection,” Rev. Thompson said. “We had more people willing and able to help than we needed to deploy. They were saying, ‘Let us know what you need when you need it.’”

Eastman United Methodist Church was one of several South Georgia United Methodist churches who stepped up to serve before, during, and after Hurricane Dorian. When the hurricane was forecast to hit the coast, the congregation quickly decided to turn its social hall into a Good Samaritan shelter.

Having attempted twice before to open as a shelter – during Hurricanes Michael and Irma – the church was prepared with air mattresses, sheets, and supplies. It took just a few hours to set up and get ready, said Rev. Ted Goshorn.

“The congregation has wanted to do this for three years,” he said. “It’s just a characteristic of this church. They’re a very outward-focused congregation.”

Since Hurricane Dorian skirted the coast, no one showed up at the shelter, but they’re prepared for the next time they’re needed.

A verse from Matthew 25 captures why Eastman UMC has worked so hard to host a shelter, Rev. Goshorn said.

Rev. Thompson is grateful for the connection’s communication, capacity, compassion, and charity.

“We’ve been hit by hurricanes from the south and on the coast, we’ve been tornadoed in the middle … we’ve all experienced it,” he said. “The blessing is that we’re there for each other. It didn’t hit us this time, but it did hit people we’re connected to and we need to help, so there’s an immediate response, not even a second thought, and that’s the blessing to me.”