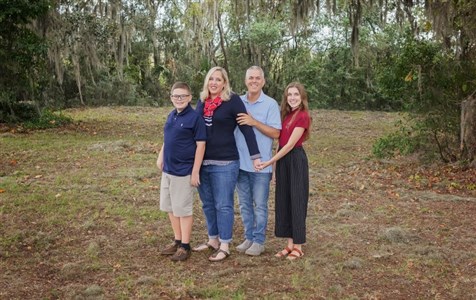 Reprinted with permission from Pooler Magazine

What if you were told you had two or three years to live? Would you be scared, angry or would you be at peace? At 45 years old, Gateway Church senior pastor, Matt Hearn, knows what it feels like to hear those words. This summer he learned that he has a 10 percent chance of surviving the next two to three years. If you have the pleasure of meeting him personally, you’ll immediately notice that Matt, despite his fate, is at peace. He is a motivator, an inspiration and living proof that faith can carry you as far as you will allow it.

Matt, who has always had good health, started suffering painful migraines in July and knew something wasn’t right. At first, doctors thought he had shingles and after additional testing, they discovered a 15-pound tumor in his abdomen. Within a week of doctors finding it, Matt was sent to Piedmont Atlanta Hospital in Atlanta, Georgia, to have it removed. It was a dangerous surgery that doctors in Savannah did not wish to perform.

What was first thought to be kidney cancer, turned out to be something much more serious. Matt was diagnosed with spindle cell sarcoma. With more than 50 types of sarcoma, Matt’s type is called synovial, a soft-tissue sarcoma. As one of the rarest forms, only one in three million people are diagnosed with it. No oncologist in Savannah has ever seen it and Matt was referred to the Mayo Clinic in Jacksonville, Florida, to see Dr. Steven Attia, the leading authority on sarcomas. “You hear about people dealing with cancer, but when it’s you, it just feels so unreal,” says Matt. “I thought, ‘How can this be happening to me?’ I wept, grieved for myself and then I prayed. I asked God to help me understand what He was doing and what this means for me.”

As a pastor, Matt understands what it means to have faith. In 2006, with the help of a devoted staff and remarkable volunteers, he started Gateway. It was a humble beginning for the church and Matt poured all he could into building it up. Services began at the West Chatham YMCA and when attendance outgrew that space, services were moved to Godley Station School. In October 2017, Gateway’s new building opened with enough space to seat 650 people in one service. In large part, it was Matt’s faith that served as an inspiration for the tremendous growth the church has witnessed. It is also his relatable stories and his funny (serious when he needs to be) personality that draws an engaged crowd.

Coming back to faith, it’s what Matt is relying on during his time of sickness. If he says it once, he says it 50 times, faith will get him through. Others recognize his tremendous trust in God, too. “People are encouraged by his faith,” says Sam Martin, executive pastor, Gateway Church. “We see he is going through this really hard time, but his faith hasn’t changed. His consistency has a big impact on those around him and serves as a powerful example for others going through their own battles.”

It’s easy to expect people with cancer to feel like it’s the worst possible thing to happen to them, and undoubtedly it is for so many; however, Matt looks at his diagnosis from a different perspective. “People say that I’m going through the worst time of my life, but I’m not,” says Matt. He then jokes and says that was middle school. “Don’t get me wrong, this is really hard, but it’s actually the best time of my life. To see so many people supporting me and saying things to me that they may only say at my funeral and being closer to my friends and family makes this really a blessing.”

The support from Matt’s friends and family and the church has truly been remarkable. In late August, the church set up a GoFundMe page to help Matt with the financial burden of treatment and travel. The goal was to raise $8,000. By October, the donations topped more than $17,800. “I’m truly humbled. When it comes to faith, how can I day after day, month after month, receive so many good things from God and abandon my faith when something bad comes,” asks Matt. “God has never been so near me. In this season, I sense his presence and I’ve seen him working. God is near the broken-hearted.”

Matt says years of practicing faith has prepared him for this moment. He offers advice for others who may be fighting a battle. “Whatever mountain you may be facing, it’s hard to have faith if you didn’t have it when you come up to the mountain. When the wind is at your back and everything is going good you really need to build up your faith that way your heart is prepared,” says Matt. He also recommends borrowing the faith of others when yours isn’t strong enough. “Surround yourself with people who believe and know that God hasn’t forgotten about you.”

Aside from a strong faith, Matt says God has blessed him with time. When you know when your life may end, Matt says you don’t take the time you do have for granted. “When you’re told you only have two to three years to live, you have a greater awareness of every moment and its meaning. You don’t think you can do something another time, you go ahead and do it.”

He is doing as much as he can with those he loves, especially his wife Lori and his two children, Emma,15, and Jack, 12. His diagnosis has given him the chance to do something for his family; writing each of them letters related to moments in their lives. “The first one was to my daughter on her 18th birthday. I’ll also write one for her wedding day,” smiles Matt. “Whether I’m living or not, she will have those words. I’m thankful that I’m able to put into words what my family may want to hear from me.” Matt gets choked up when he talks about this. He recalls a recent conversation he had with his daughter who told him she wanted him to walk her down the aisle. He told her he wanted to, but if that’s not what God has in mind, be thankful for the time we did have together.

It’s that attitude that makes you admire Matt. “People ask me why I’m not angry. My response is that I’m so blessed. My life has been extraordinary. God has given me everything I could have wanted or hoped for. I have a beautiful wife and a wonderful family and I get to be the pastor of Gateway,” says Matt. He has also come to understand cancer in his own way. “The only way cancer makes sense is that it’s an opportunity to point people closer to God.”

What the Future Holds

After learning of his diagnosis, Matt decided to move forward with chemotherapy in hopes of prolonging his life. His first round was in October and he will undergo a total of four rounds. Matt says the treatments are excruciating, both physically and mentally. “When you’re sick, you’re lonely because with chemotherapy, you can’t be around people,” Matt admits. “It’s easy to isolate yourself, but you really have to reach out to people and ask for help.” At Matt’s house, they have plenty of hand sanitizer and face masks for when people do come to visit.

The chemotherapy forced Matt to make a very tough decision. He has taken a leave of absence from Gateway at least through January. “This is what I’ve given my whole life for and to not be able to do what you love most is hard,” says Matt. He knows, though, the church will continue to thrive. “Leadership is how the organization functions in your absence and on that score, I feel really good about the people I’ve poured in to. God has led me to put the right people in place.” Matt laughs when he says church attendance has gone up in his absence. His sense of humor hasn’t changed.

After Matt completes chemotherapy, the next step will be to participate in a clinical trial. If there’s one thing you learn about Matt it’s that he isn’t ready to give up and he won’t give up. He’s applying for a grant that would afford him the opportunity to travel and attend leadership training next year. When asked about the work he’s done so far, Matt believes he has accomplished all that God has set out for him; however, he feels he has a lot more left to do. “I do believe He can heal in spite of my diagnosis. In Isiah 38, God adds 15 years to Hezekiah’s life.” Matt smiles when he says, “I’m trusting God will give me another 15 years.”