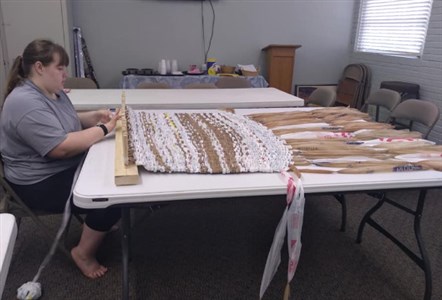 You’ve heard of Charlie’s Angels, but do you know the Plarning Angels?

A group of women, affectionately known as the “Plarning Angels,” are using plastic shopping bags to help people who are homeless.

Park Avenue United Methodist Church’s Homeless Bedroll Ministry has, for the past year, been making bedrolls out of used plastic shopping bags, the kind nearly everyone has stuffed under their kitchen sink or tucked in their pantry.

“Everyone has hundreds of these bags in their homes. The missions committee talked about it and it was a very low-cost ministry we could start that would have a direct impact on those in our community,” said Jennifer Clark, Park Avenue UMC’s Director of Missions. “So we ran with it and it’s been amazing.”

The group of about two dozen women meet at the Valdosta church each Wednesday afternoon to make plarn – plastic yarn – and crochet. They have made 30 bedrolls so far and have another 18 ready to finish.

Three feet wide and six feet long, it takes 500 bags and six to eight hours of work to make each bedroll, Clark said.

Each plastic bag is straightened and smoothed before the handles and bottoms are cut off. Then they’re cut into four two-to-three-inch strips and tied together with slip knots to make a long strip of plarn that’s rolled into a ball.

Crocheting the mats isn’t difficult, Clark said, but it does take time and a few basic crochet skills. Not a crocheter herself, Clark has learned to weave the plarn on a loom her husband designed and built. She can weave a bedroll in two hours instead of the six hours it takes to crochet.

When she was about 9 years old, Sarah Booth’s aunt taught her to crochet. After crocheting for a couple of years she put the hobby aside until last year. She now crochets bedrolls “everywhere:” while waiting for her children’s bus, at gymnastics practice, and while watching football games with her husband.

“You have all of this idle time that you don’t even realize, and before this I was probably just an idle cellphone scroller, reading all of the news outlets and such, but you get so much more peace from this,” Booth said of making bedrolls. “It’s peaceful, it’s relaxing, you can decompress, and it’s not the drain on you that some other habits are.”

She enjoys using her talents and abilities while giving new life to something that might have otherwise gone into the garbage.

“I think it’s great that we’re able to repurpose something that everybody has in their house. To me you’re giving it a much better purpose!”

Park Avenue UMC has for years partnered closely with Lowndes Associated Ministries to People, Inc. (LAMP), which serves those who are homeless in Valdosta and Lowndes County. While LAMP’s homeless shelter can house up to 60 people, there are many who don’t want or can’t live in the shelter, Clark said. The bedrolls are for them.

“We wanted to help those who are unsheltered,” she said. “They have no barrier between them and the ground, so if it’s cold or hot or wet there’s just no getting away from that.”

Lightweight and portable, the mats dry quickly, are easy to shake clean, and are a good alternative to sleeping on concrete or dirt. They’re even made with tying straps and shoulder straps to make them easily portable.

As the women have gathered weekly during the past year, they’ve become a family, sharing life, loss, and love. It’s a multigenerational group, with 4-year-olds sitting alongside 84-year-olds. Beautiful friendships have formed, Clark and Booth say, and that’s an unexpected blessing of the ministry.

“These aren’t pillowtop mattresses we’re giving people, but if it can give even a bit of comfort and relief from some of the harsh realities they’re living in, we want them to find some comfort in having something in between them and the ground.”