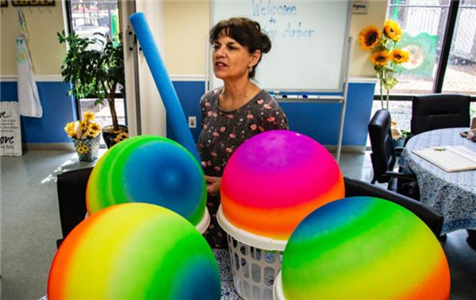 By Taylor Cooper, The Brunswick News

Wesley Arbor gives people with dementia a chance to have some fun while giving their caretakers a break, with the Norma Lucas Academy of Fine Arts at Wesley offering a chance for people with special learning needs and tuition assistance to learn to play a wide array of instruments.

Beth King, the director of Wesley Arbor, started working with other members of the church to set up the program over two years ago, although COVID-19 pushed the actual execution back for a while. The idea originated with other Methodist churches under an umbrella program called Respite for All.

Edna Romano, who volunteers with the Wesley Oaks program, said the name Respite for All pretty well encompasses the goal. They take the seniors, most of whom have Alzheimer’s disease, the most common form of dementia, and give them a structured day of activities and fellowship.

The church held an open house recently to introduce Wesley Arbor to the public. One of the activities they tried was something of a drumming game. Participants got a rubber inflatable ball and pool noodles, and drummed along to a beat.

“We didn’t realize how much fun we’d have doing it,” Romano said. “They (the pool noodles) sort of muffle the sounds, so you get the sounds of a drum, but if you’re not on-beat you don’t get a cacophony.”

She picked most of the music the first time, trying to select songs she thought seniors would enjoy.

“They’re telling me people like Andy Williams. I had the Commodores, the Temptations and what I remember being rhythmically good for drumming,” Romano said. “Well, their favorite was Bruno Mars and ‘Uptown Funk.’ We had a rowdy ‘hallelujah.’”

The open house was a great success, but it also revealed the differences between the participants — some enjoy energetic music more than others, while some like standing and moving and others like sitting down.

“Once you realize the limitations or strengths of the group, you can adapt it to them,” she said.
All the games and activities are designed to involve as many people as possible, like a game of volleyball once again using pool noodles and balloons.

Some of their members play instruments, and if they so choose and play for the other people participating in Wesley Arbor.

“There’s one who can’t read music or play anymore, but he for sure knows his songs,” King said. “It’s important they don’t feel alone and isolated.”

Equally important to making sure the participants have fun is giving the caretakers a break to do some shopping alone, play a round of golf or just go home and read a book, King said.
“One of them, she came to me and said ‘I almost don’t know what to do with my time,’” King said.

Also kicking off is the Norma Lucas Academy of Fine Arts at Wesley, headed up by Director Linda Dorsey.

“It’s something the area has needed and wanted for a long time. I feel like parents have been waiting for this to come along,” Dorsey said.

Named after a pianist who played for the church for around 50 years, the academy offers kids and adults private lessons in piano, guitar, voice, strings, brass and woodwind instruments, among others.

“We even have a ukulele class,” Dorsey said.

All instructors are professionally trained and go through the same security screening as public school teachers, she added.

Professional music instruction is proven to boost performance in other areas of life, academic and social, she said.

“(Music is) healing, inspiring,” Dorsey says. “It’s part of growing up and learning to communicate. It’s a very necessary part of all of our lives, even just listening to music.”
Specifically, the academy caters to people who wouldn’t normally get this type of instruction, she said.

“We want everyone to be able to study music if they so desire. We’re not turning away anyone because of price or cost,” Dorsey said. “We need to be self-sufficient, but we’re not in this to make money, we’re in this to minister to kids and adults.”

Anyone with limited income or special learning needs are more than welcome, she said, and the church will work with people to get them into the program.

“This is a ministry, so we are serving children who otherwise would not be able to afford to take these lessons,” Dorsey said. “We’re serving children with special learning differences, and some students qualify for tuition assistance scholarships.”

The first big recital for the fall semester is on Dec. 11, a Christmas show. Once the program is more established, she hopes to take school members around town to nursing homes and assisted living facilities, among others, to let the students show off their skills.