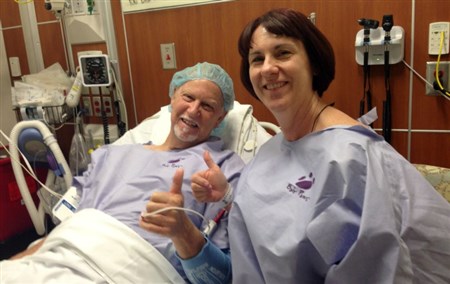 Kathy Roberson is a giver, but one of the best gifts she ever gave wasn’t wrapped in shiny paper or topped with a card.

Instead of bows and balloons, her gift came with needles and nausea, bloodwork and biopsies, a colonoscopy and a CAT scan.

It was the gift of a kidney, a lifesaving gift of hope given to a man she’d never met.

Roberson, the wife of Ocilla United Methodist Church pastor Rev. Jay Roberson, first learned of Charlie Merwin’s plight when a mutual friend shared his “Kidney for Charlie” Facebook page and asked her to pray for him.

A devout Christian, Roberson immediately began to pray for Merwin, an Adel native who suffers from focal segmental glomerulosclerosis. Also known as FSGS, the disease is a leading cause of kidney failure in adults.

“I started praying, ‘Lord, please provide a donor for him to heal him,’ and I prayed for God to put the right person in his life to find a kidney,” Roberson said.

After praying for three days, Roberson said she heard a gentle voice say, “Why not you?”

“I looked around and said, ‘Lord, I can’t do that; I don’t do doctors or needles or hospitals, but I’ll keep praying.’” she said.

Later that night, as she was again praying, Roberson felt God saying, “I told you to do this.”

The next morning she called Emory University Medical Center in Atlanta and started the process to be a kidney donor. She was one of more than a dozen people who had volunteered to be tested to see if they were potential donors.

Never before had Roberson heard such a clear message from God through prayer.

“I know he hears and answers my prayers, but I have never before heard that calm voice so clearly convicting me to do the right thing,” she said.

Though Roberson had prayed fervently for Merwin, the two were still strangers. Her husband, Rev. Roberson, knew Merwin well from the time they had spent together in ministry at Adel United Methodist Church, and Merwin’s daughter Dana had been in Rev. Roberson’s youth group at Adel UMC. A forrester by trade, Merwin had also formerly served the South Georgia Conference for seven years as a lay pastor.

That’s why, after several rounds of testing and finding out that her kidney was a match – “not just a match, but a perfect match,” – Roberson asked her husband if he would call Merwin and see if they could stop by for a visit.

So on Christmas morning, after telling her daughter of her decision to donate her kidney, the Robersons stopped by Merwin’s home and surprised him with the news. Tears were shed and prayers and praises were lifted up.

“What a great gift, on Christmas Day, for somebody to tell you that they are giving you one of their kidneys,” Merwin said. “It’s beyond comprehension that someone would make that sacrifice. As a Christian we see that same sacrifice in what Jesus did for us. When we didn’t know him he crawled up on the cross and died for our sins. That someone would crawl up on an operating table and give up an organ before they knew you … that’s a gift you can never repay.”

After months of preparation and a battery of tests, the kidney transplant was set for May 7. The surgeries were successful and today, “their kidney,” as they both like to call it, is functioning well. Merwin will head to Emory in the coming weeks for a routine checkup and biopsy.

“I told Kathy that I woke up the morning after the surgery with an urge to put on makeup and go shopping,” Merwin joked. “I immediately felt better and my color was better as soon as the kidney began functioning.”

Merwin was able to go home after five days and Roberson was released after three. Even though she was only in the hospital for a few days, she still had to miss three weeks of work for the entire surgery and recovery. Her new employer was supportive and generous enough to grant her the time off with pay.

Merwin, just one year after starting dialysis and being placed on the donor list, has recovered so well that he was able to enjoy one of his favorite activities recently – deer hunting – something he wasn’t sure he’d ever be able to do again.

“It’s a miracle,” he said. “(God has) blessed us, and I try to share that blessing with other people.”

Roberson said that, more than anything, this is a story of obedience, faithfulness, and God’s provision.

“I’ve been a Christian for a really long time and have a deep faith in Christ, but I have never heard His voice so clearly about what to do with my life,” she said. “God’s faithfulness through this whole journey has been evident over and over and over again.”

Even Roberson’s “complete phobia of needles” wasn’t enough to keep her from doing what she knew God was clearly telling her to do.

“I wanted to be obedient to what he told me to do,” she said. “God is good. I just did this from Him. I was told to do this, and I just said yes.”