Pastor steps out in faith and discovers the promise of Ephesians 3:20 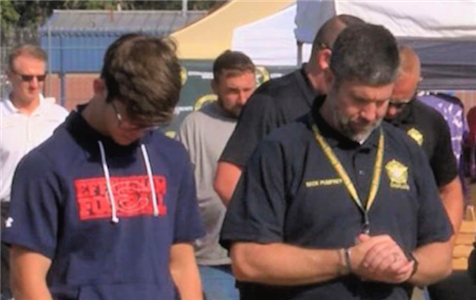 Early each morning you will find Nick Pumfrey live on social media sharing God’s word, offering a word of encouragement, and issuing a challenge for the day. Until recently, as soon as he stopped the live feed he would hop in his car for his morning commute to his full-time job at Gulfstream in Savannah, Georgia.

As a bi-vocational pastor, Pumfrey enjoyed a solid career path in which, professionally, he worked his entire life to fulfill and had accomplished more than he could have imagined at 41 years of age. But God had a different path and plan for Pumfrey.

“It took a long time for me to answer God’s call on my life to serve Him in pastoral ministry,” said Pumfrey. “I have been hard headed my entire life and have had to learn so many hard lessons because of my self-reliance.”

Pumfrey became a certified lay ministry in 2018 and attended basic and advanced lay servant training in 2019.

In 2019, a defining moment occurred as a meeting wrapped up at Goshen United Methodist Church where Pumfrey and his wife, Sabra, were active members. Rev. Chance Ward, his friend and pastor at Goshen UMC, jokingly said, “Stop running, boy!”

This light-hearted statement cut straight to Pumfrey’s heart, and, at that moment, he realized he had indeed been running from God’s calling on his life. Feeling as if he could not take another step, Pumfrey - with Ward by his side - knelt at the altar where he vowed to “get more comfortable saying yes to God.”

What followed was a continued struggle for self-reliance versus trusting God and God’s timing. As Pumfrey began to lean into and discern his calling, he accepted his first appointment in 2020 as a part-time associate pastor to Goshen UMC in Rincon.

Prayers continued for God to clearly reveal his next step, but Pumfrey admits what he was really saying was, “God please show me what’s next; then I can decide whether I will be faithful or not.”

In 2021, that next step was his own church through a part-time appointment as pastor of the Clyo/Silver Hill Charge. As the daily prayers and wrestling continued in discerning his calling the answer continued to be to simply trust God, which, for Pumfrey, felt beyond his understanding and obedience at the time.

Pumfrey’s next step would require the biggest step of faith in his journey: the resignation from his full-time job. The uncertainty of going from executive pay to part-time pastor salary was scary, he shares, but that fear fell away and was replaced with joy and excitement in following God more fully.

Pumfrey said what happened next could only be captured in the essence of Ephesians 3:20-22: “Now to him who is able to do immeasurably more than all we ask or imagine, according to his power that is at work within us, to him be glory in the church and in Christ Jesus throughout all generations, for ever and ever!”

A week after turning in his resignation Pumfrey was sharing his faith journey with the local sheriff. During the course of the conversation, Pumfrey became an answer to the sheriff’s prayer and was met with an opportunity to be a full-time chaplain for the Effingham County Sheriff’s Office. Pumfrey knew his next step. Along with serving his two churches - Clyo and Silver Hill - he is now serving as a chaplain.

“I am so humbled, so amazed, so thankful,” said Pumfrey. “We serve an awesome God, a God who loves us and leads us even when we are stubborn and self-reliant. God has reminded me again that He will be with me always and to trust him.”

Allison Lindsey is a member of St. Mark UMC in Douglas, Ga. and chairs the Conference Nurture Team.