Paving the way for female clergy 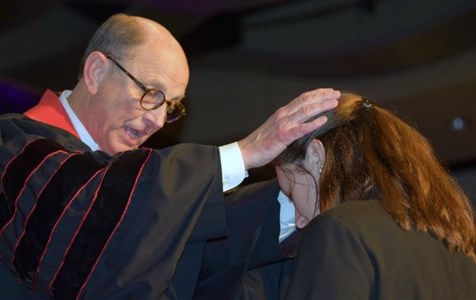 When Rev. Marcia Cochran was first ordained in 1975, she had never heard a woman preach. In every appointment she served before retiring, she was that congregation’s first female pastor.

At the 2018 Annual Conference session, the only ordinands were two females, both being ordained as deacons.

A lot has changed in 43 years, Rev. Cochran said, but she has endured pain, hurt, and rejection along the way.

That bumpy path, however, has helped pave the way for future generations of female clergy to follow in her footsteps, hopefully on a much smoother road.

Rev. Alaina Harrison serves Wesley United Methodist Church in Macon and was ordained a deacon in June. As the daughter of a United Methodist pastor, she grew up seeing strong female leaders, both clergy and laity, and says she’s always been exposed to women in ministry.

“I have never once second guessed that I could do ministry, even in an ordained role,” she said. Many women she ministered to while serving at the Wesley Foundation of Macon never knew vocational ministry was a possibility, but Rev. Harrison said that, for her, seeing women in ministry was “normal.”

“In The United Methodist Church I not only heard it in theory that women could be ordained but I saw it, I knew that it could happen,” she said, citing mentors like Rev. Meg Procopio, Rev. Teresa Edwards, and other strong female leaders like Rev. Cochran.

Rev. Cochran – the first female ordained elder in the South Georgia Conference – was ordained an elder in 1978 along with Rev. Allison Rhodes. She retired in June and will continue serving in retirement, at Jekyll Island United Methodist Church.

She did not have the luxury of seeing women in leadership or in ministry settings, but what she did have were the United Methodist Women.

Growing up at Bainbridge United Methodist Church, Rev. Cochran remembers the women of the UMW who supported and encouraged her as a child and teenager. And women from around the conference sent cards and letters while she attended seminary at Emory University’s Candler School of Theology.

“It was tough, and had it not been for the United Methodist Women, I would have quit,” she said. “They sent cards, they sent notes, they invited me to various things, and one of the things they always did, which I will always be grateful for, is that they invited me. For the first 30 to 35 years of my ministry I went just about anywhere I was invited.”

Rev. Cochran says that when she was ordained she made a pledge that she would never turn down an invitation to speak at a UMW event unless she absolutely couldn’t make it. She’s preached at large churches, small churches, and everywhere in between. She’s taught at Wednesday night suppers, UMW meetings, and district UMW events.

“I felt like I owed the UMW but also, what I discovered, is that when people heard a woman preach or speak it became less threatening to think about having a woman minister,” she said. “I really made a conscious effort those first 30 to 35 years to go wherever I could go. I wanted people to hear a woman and to know it’s okay. All of that helped lay a foundation to help people know that it’s going to be okay (to have female pastors).”

Rev. Harrison is Wesley UMC’s first female pastor. She and her husband, Rev. Greg Harrison, co-pastor the church, and she says she has been warmly welcomed by the congregation.

“I am extremely fortunate,” she said. “I am at a great place.”

But in the past people assumed she was a children’s minister and she’s been mistaken for her husband’s secretary.

“Even now there are still some frustrating times,” she said. “Oftentimes clergywomen – and it probably applies to laity in leadership positions as well – get more comments on what we’re wearing and how we look versus the substance of what we’re saying. That’s so small, though, in comparison to our calling. I can’t imagine what it was like years ago. I'm so grateful for all those who have gone before me.”

Today, the South Georgia Conference has 68 women elders and deacons in full connection, 39 of whom are currently appointed.

Rev. Cochran and Rev. Harrison share the hope that progress continues and equality is realized.

“I would hope that the day would come when it’s so commonplace to see women in the pulpit that nobody would think a thing about it,” Rev. Cochran said.