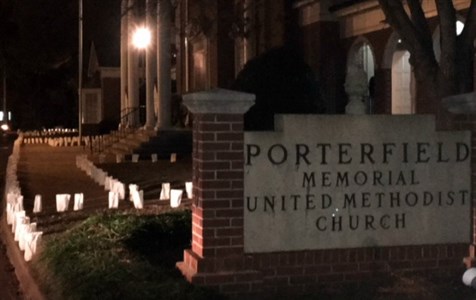 With a sharp uptick in violence and crime in Albany in the past year, one local United Methodist Church is praying for change and sending a message of hope and unity to the community.

There were more than 20 murders in Albany last year, more than double what the southwest Georgia city averaged in previous years. The city and its citizens have experienced a spike in crime, much of it drug related, said Rev. Robert Greene, senior pastor of Albany’s Porterfield Memorial United Methodist Church.

“It’s devastating to see this going on in our community,” he said.

Something has to change, Rev. Greene said, and the Porterfield Memorial UMC congregation wanted to help make the community a better, safer place to live. An idea was born for a citywide, year-long prayer initiative, and “Watch and Pray Albany” was launched.

A prayer movement, the “Watch and Pray Albany” prayer initiative was begun Sunday, Dec. 3 and invites and encourages Albany residents to fast and pray for the city’s 1,033 streets, with each one being adopted and prayed for by an individual.

Rev. Greene suggested to the congregation that the streets themselves should guide their prayers.

“Pray for industry to come to Albany. Pray for the families that live on that street,” he said. “But the overarching thing we are praying for is for God to reverse this violence; that there will be no other explanation for a huge reduction in violence than to say, ‘God did this and God’s people are praying.’”

William “Skeebo” Hancock, an Albany Realtor, is a lifelong resident of the area and knows its neighborhoods and businesses well.

However, when the the Porterfield Memorial UMC member adopted four streets and began to pray and visit them to acquaint himself more fully with them, he was surprised by what he found.

“It opened my eyes,” he said. “Three of the streets I had never even been down.”

That first Wednesday he fasted, drove down the four streets, and prayed. He paid attention to all he saw: the businesses, the residents, the parks, the Marine base, the schools. He noticed nursing homes, new construction, and a man walking his dog.

“There’s vibrancy, bright spots, life,” he said. While he sees the blight that affects every city, he also sees the pride that Albany residents have in their homes and neighborhoods.

In addition to a reduction in violence and crime, Hancock says he’s praying intently for racial reconciliation and harmony in the city.

“I pray that we can come together for a common cause of making Albany a safer place to have a family,” he said.

Another Albany church, Christ Harvest Missionary Baptist, has joined the prayer initiative. Rev. Greene hopes other congregations and individuals who have an interest in the city join in prayer, too.

In October, Albany mayor Dorothy Hubbard declared war on crime and formed the Albany Safe City Coalition to address the city’s rise in violence. But the Porterfield Memorial UMC congregation is turning to God to change people’s hearts. They have hope and know that, as with everything, God is with them.

“For this to be turned around, it’s got to be God,” Rev. Greene said. “And God is in the business of turning things around.”