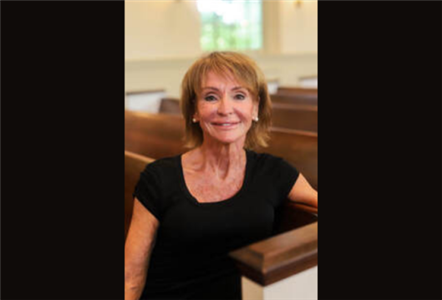 Sunday, May 15 was Pollock’s final performance, a swan song to cap off five decades of service to a congregation and church she dearly loves.

Her final Sunday morning playlist included “All Creatures of Our God and King,’’ a duet accompanied by Helen Adams on the piano, a Bach prelude, and, by special request, the “Hallelujah Chorus” from Handel’s “Messiah.’’

“I tried really hard to keep it together,” Pollock said of playing her final worship service. “That was not my finest hour; by then I was so emotional, and when you’re emotional you can’t play. They made sure I got emotional!”

Since 1971, Pollock has served with 12 different senior pastors and 10 different ministers of music. It was a former Riverside UMC choir director, the late Earle Barnette, who persuaded her to take the job all those years ago.

Rev. Antonie Walker is one of the pastors Pollock has served alongside. When he arrived at the church in 2019 Pollock was there to help ease the transition, train Rev. Walker, and introduce him to the community and congregation.

“As pastors change, Gail has still been here and is a pro at her job,” he said. “I credit a part of my training, my introduction to Riverside, to Gail. She provided consistency for the congregation and church.”

Pollack began playing the piano when she was just 8 years old. The organ came a bit later, at 15. Since then, she’s played scores of songs at thousands of worship services and hundreds of weddings and funerals.

Music is an emotional experience, she said, and helps set the mood and tone for the experience.

Pollock played the music she wanted to hear in church, which included a lot of Bach and other difficult arrangements. Her go-to postlude for a big occasion like Easter was always Widor’s “Toccata (from Symphony for Organ No. 5).”

As an organist, Pollock’s role was to help guide people through the service via song, but she often delivered a message through music, Rev. Walker said.

“Sometimes before I’d even get up to preach Gail has already ‘played’ my sermon and preached it, pretty much, through the music. I think that unity between the music and the message is important.”

Even though she’s now retired from Riverside UMC, Pollock will continue sharing her gift of music. She teaches piano as an adjunct professor in Mercer’s Townsend School of Music and plays there as an accompanist. She plans to spend retirement traveling and said she’ll now be able to visit Forest Hills United Methodist Church where her son, Tommy, plays drums in the contemporary worship service band.

But Riverside UMC won’t be the same without her, Rev. Walker said.

“There is no way we can replace Gail. She’s the best.”