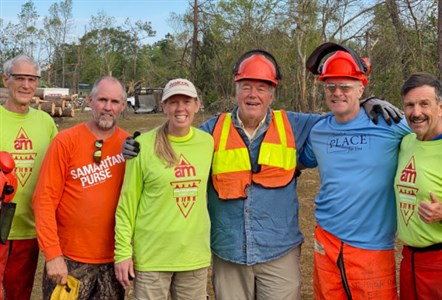 In what was the most significant tornado outbreak in Georgia since April 2020, at least 25 tornadoes were produced in the destructive storms that crossed the state April 5-6.

The most damaging tornadoes occurred in Bryan, Houston, and Dooly counties, and the South Georgia Conference of The United Methodist Church responded immediately to assess, respond, support, and meet needs.

“This is the worst disaster that I’ve ever been a part of,” said Coastal District Coordinator Kelly Crane, who lives Rincon, just over the Bryan County line in Effingham County. “I’ve never seen destruction like this from a tornado.”

Tornadoes struck within two miles of her home, and while she and her neighbors were spared damage, nearby Pembroke and Ellabell were two of the hardest-hit areas in South Georgia.

Dozens of homes were destroyed, trees were snapped like toothpicks, and mobile homes were tossed like toys, she said.

“Where this tornado touched down was catastrophic damage.”

Part of that coordinated response included Ellabell and Pembroke United Methodist Churches opening as relief centers and initial donation drop-off sites. Ellabell UMC also served meals and acted as a temporary shelter for linemen, first responders, and anyone affected by the storm.

Through generous offerings, the church collected more than $120,000 in designated funds for immediate relief for those impacted by the storms.

“Seeing this disaster first hand has been a very emotional experience. It hits home and is different when it’s right here in your own backyard and community. Watching the amazing love and support from the community, surrounding areas, and even from other states has been such a blessing,” said Rev. Dylan Bowden, Ellabell UMC’s pastor. “Seeing how the connectivity of The UMC brings so many people together to be the hands and feet of Christ at work is truly amazing. We have made a huge impact but still have a long way to go. God is good, even in the midst of chaos and struggles.”

And while the shelters have now been closed, there’s still much work left to do.

“We know this is going to take a long time; this is long-term recovery,” Morales said.

Most of the debris has been hauled away and many of the trees have been cleared, but Early Response Teams (ERT) are still needed to help homeowners pack, clean, move, and repair their homes.

UMCOR awarded the conference a $10,000 solidarity grant that – along with additional grants and donations – will help meet needs and finance repairs.

ERT teams and monetary donations are and will continue to be needed in the weeks and months ahead, Crane said. Physical donations are no longer needed.

“We cannot fit one more toothbrush or one more bottle of water in the donation center. It’s just a testament to how people want to help,” she said. “But diapers and toothpaste aren’t going to help people rebuild their houses and that’s what we need to start looking at.”

She urged those interested in serving to continue to monitor the Conference website for specific needs and requests for teams.