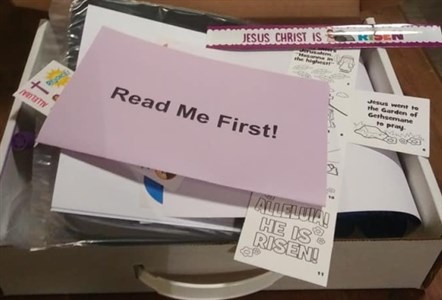 While much of this past year has been an exercise in sacrifice of some sort, the season of Lent is a time of fasting and surrender in preparation for the coming of Easter, a time of self-examination and reflection.

For many South Georgia congregations and pastors, this Lenten season is also a time of creativity and an opportunity to innovate and adapt.

But because of the ongoing pandemic, church leaders had to cut back on some of the usual traditions and rethink how they were going to mark the season and journey toward Easter.

“We just knew we couldn’t do those things this year,” said Rev. Bill Culpepper, a deacon at Brunswick First UMC.

“We wanted to do something that connected our church to Lent even though we couldn’t get together,” Rev. Culpepper said.

To do so, they created “Lent in a Box,” a kit that includes six weeks of devotions, a six-week prayer guide, kids' activities, and fun surprises.

Rev. Culpepper estimates that more than 100 people are participating in the church’s “Lent in a Box” project. And although they can’t all be together as usual, he hopes it will help strengthen the congregation’s connection to each other and Christ this season.

“We need the time of Lent to reflect and consider our part in Good Friday,” he said. “We’re hoping it will help build bridges that may have been lost in the past year because of the pandemic.”

Several months ago, Rev. Allen Cason began thinking about what Ash Wednesday and Lent would look like this year. During conversations with ministry colleagues, he came up with the idea for a calendar that included the three pillars of Lent: prayer, fasting, and almsgiving/service. And knowing that personally administering ashes to worshipers wouldn’t be wise, he instead packed ashes into small, clear makeup containers. The ashes, instructions on how to self-administer them, and the calendar were placed in special purple bags for congregants to pick up.

“I think Lent is extremely important as it prepares us for Easter and as a time of self-reflection,” said Rev. Cason, pastor of Metter United Methodist Church.

The calendar helps keep those who use it on track, Rev. Cason said.

“It’s not all about giving up things, it’s also about doing things and adding things to our life that are good,” he said. “(Using the calendar is) a holistic approach to Lent.”

Even in the midst of the pandemic, it’s important to mark certain days in the life of the church, said Rev. Precious Hawkins, pastor of Asbury United Methodist Church in Savannah.

But how to do so safely? That was the question Rev. Hawkins and the church’s worship team had discussed for weeks.

They decided to join ConneXion Church and team together for three outdoor, drive-in services. Rev. Hawkins and Rev. Michael Culbreth, pastor of ConneXion Church, delivered a liturgy, prayer, and hymn. Individual cups or bags of ashes were given to each group to impose themselves.

“Being together allowed us to offer more than we would have done individually,” Rev. Hawkins said. “That’s the good thing about the Church. We wanted to maintain a sense of fellowship and community in a safe way, and I think we were able to do that.”

Rev. Cason has been inspired by the creativity he’s seen this season in churches across the connection.

“It’s been really neat to see all of the different ways people have come up with how to celebrate Ash Wednesday. It’s caused us to think outside the box and be creative, which I think is ultimately really good for the church,” he said.