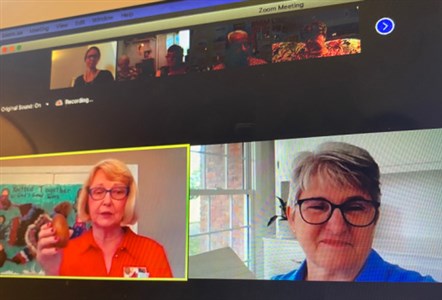 Apart but together via computer screen, they celebrated 151 years of mission and ministry during their first virtual annual meeting.

“Women, children, and youth all over the world who depend on us for many services are able to receive the help they need because you have been faithful,” said Carol Banks, South Georgia United Methodist Women president.

“What blesses me the most is just the faithfulness and the commitment that you have to God, the Church, and really wanting to make people’s lives better all around the world. What you do matters. I want you to know that. What you do really matters.”

During their business session, South Georgia United Methodist Women pledged $100,000 to missions giving in 2022 and approved a $53,769 budget for the coming year.

During her address, Banks spoke about all that United Methodist Women were able to accomplish during the past two years, even amid a global pandemic that kept them from meeting in person.

“Working, worshipping, and learning together, we have strengthened our sisterhood,” she said. “Even though we have not been able to be together physically, we have still been knitted together by common purpose, our faith in God, and our commitment to be His hands and feet in a hurting world.”

Bankhead shared with each new and continuing officer a red, hand-knitted prayer patch, explaining that she had woven each one specifically for the individual and with a colored ribbon signifying the person’s role and calling.

“I am excited to serve in the organization that has meant so much to me, beginning with mentors who encouraged me as a youth and young woman, and continuing with friendships I have enjoyed for more than 30 years,” said Jones, who attended her first School of Christian Missions at age 14. “I look forward to 2022 bringing opportunities to connect in person.”

Susan O’Neal, Development Director at The Vashti Center, shared a message about the importance of connection and how Vashti has brought hope, healing, and support to children and youth in southwest Georgia.

“We, as Christians, as human beings, are wired for connection and togetherness,” she said.

She thanked the South Georgia United Methodist Women for their generosity and support during these challenging times.

“The Kingdom of God is within us. You take that wherever we go,” she said. “He’s calling you. Thank you for all you are and do for Vashti.”

While it was not their usual, in-person gathering, the annual meeting was an important day to come together as United Methodist Women, said Banks, who, after serving four years as president, passed the gavel to Jones.

“I appreciate all of you who are committed to serving God,” she said. “You make UMW a strong organization with a heart for mission.

“I am leaving the South Georgia UMW in good hands,” said Banks, who followed in her mother, Eugenia Yawn’s, footsteps, as president of South Georgia United Methodist Women. “And I will pray for you all to continue to be strong in faith, generous in giving, and dedicated servants of God.”