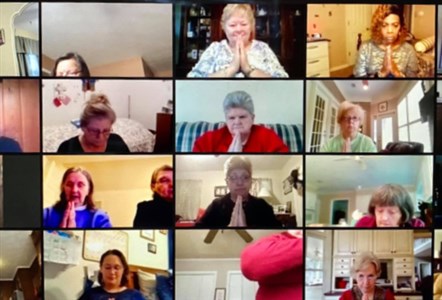 As women of deep faith who put their beliefs and love into action on behalf of others, the South Georgia Conference’s United Methodist Women weren’t going to let a global pandemic or a capsized cargo ship off the coast of St. Simons Island thwart their mission, fellowship, and spiritual growth efforts.

But after nearly a year of cancelled meetings, mission studies, and retreats, they knew they had to pivot and think differently about how to gather.

And now, meeting through a “little box on a computer screen” is keeping them connected at a time when they can’t be together in person.

Staying connected – to one another and to their faith – is at the heart of United Methodist Women, said Banks and Becky Britton, South Georgia’s Dean of Mission u. Using virtual tools like Zoom has helped the women stay engaged and involved.

After hosting a few successful UMW Leadership Team meetings via Zoom, a conference wide one day mission study was held this past February. About 100 women participated.

“That was our very first foray into the Zoom world outside of the leadership meetings,” Banks said. “We were just thrilled by the turnout.”

With assistance from Conference Communications Director Kelly Roberson and Allison Lindsey and Suzanne Akins from the Office of Connectional Ministries, South Georgia’s United Methodist Women decided to host this year’s Mission u via Zoom. Last year’s event was cancelled by the national office because of the coronavirus pandemic. Held annually at Epworth By The Sea on St. Simons Island, this year’s gathering had to be reimagined this year because the retreat center was closed to guests while housing the Golden Ray’s cargo ship’s salvage workers.

The women didn’t want to miss out on the fellowship and spiritual growth the event provided, though.

“We’re very loyal to Epworth By The Sea; they’re so good to us and we didn’t want to go anywhere else, so we decided to go virtual,” Britton said. “I was really concerned about it at first, but it turned out really well.”

While a virtual event wasn’t ideal, it was important to stay connected to one another and give United Methodist Women an opportunity to gather and learn.

“I’ve known a lot of these women for 15 to 20 years. I miss them and I want to see them, even if it’s in a little box on my computer screen,” Britton said. “That’s better than nothing. It’s really important to be connected to each other; it’s very, very important to us.”

Banks said that, while everyone would rather be together in person, the virtual meetings have been a blessing.

“They’ve kept us going during this pandemic,” she said. “It’s meant a great deal to be able to pivot and offer these classes online. Part of our purpose is that we’re going to be a community of women, and it’s hard to do that when you can’t get together. It’s meant a lot to everybody, the members and the leadership, to see each other’s faces on the screen. I think that gave us a little push to go forward.”