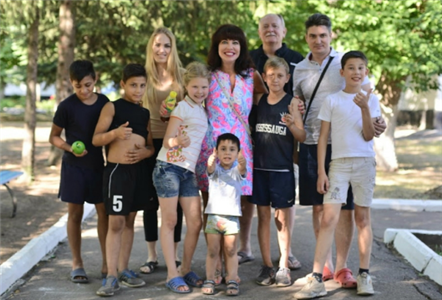 Tammy Reynolds – affectionately called Tammichka by her Ukrainian friends – read the texts pouring into her phone from her friends in Ukraine. As explosions rocked Kyiv, Reynolds’ heart broke, knowing homes and lives were being destroyed.

“What’s going on?” “What’s happening?” and “How are the children?” they asked.

For more than 20 years, Reynolds, her husband, Matthew, St. Paul UMC pastors, and dozens of church members have traveled to Krivoy Rog, Ukraine and built lifelong friendships with its residents. Since 2001, the Columbus church has cultivated partnerships with three area orphanages and has built a ministry, Compass Ministries, that serves orphans and their caregivers.

The congregation deeply loves the children, and church members grew increasingly concerned about them and their safety as Russia invaded Ukraine.

“We’ve worked very hard to keep the children and their stories in front of our people over the years,” said Reynolds, who serves as chair of St. Paul UMC’s missions committee. “We’re embedded in Ukraine now. We’re part of these children’s lives.”

Through the years, St. Paul UMC has visited Krivoy Rog twice a year. Each visit, friendships flourished, relationships grew, and bonds deepened. The congregation has joint worship services with the orphanages and they regularly trade phone calls and videos.

Compass Ministries has developed into a year-round ministry with a team on the ground and in the orphanages daily on behalf of St. Paul UMC. They check on the children; run age-appropriate, Christian activities and Bible studies, play games; host groups who meet with young adults who have aged out of the orphanages; and lead weekly small groups. The church continues to stay in contact with young adults and often provide scholarships for further education or training.

“We think of Ukraine as another extension of our church,” said senior pastor Dr. Shane Green.

The people of St. Paul, the Ukrainians with whom they serve, and the children have become family, Reynolds said.

When the St. Paul UMC congregation learned their Ukrainian children were at risk, they did what parents around the world do when children are in harm’s way. They worried. They prayed. They leapt into action.

St. Paul UMC’s social media is filled with updates about the children, the orphanages, and news about how people can help. While it’s hard to be on the other side of the world when those you love are hurting and scared, Reynolds said she’s inspired by the Ukrainians.

“I am so impressed with the young men and amazed with their patriotism and their sense of duty to the people of Ukraine,” she said. “One of the men is staying because there are babushkas – grandmothers and widows – who live in the apartments near him. He said, ‘It is my duty to stay here and do what I can to take care of them. They have no one else.’ That made me cry. I fear for their safety. I love him like he’s my son, but I am so proud to hear those words. He said, ‘That is what a Christian does.’”

Reynolds and her team have been working to get supplies and resources to the orphanages and children. It’s still cold in Ukraine and their power supply is sporadic, so they’ve tried to buy generators along with emergency food rations, medicines, extra mattresses, cots, and sleeping mats. In the midst of the war, one orphanage has taken on at least 65 additional children.

“No one is going to go into there to take care of the kids,” she said. “We’re trying to make sure they have enough food, water, and medicines.”

Everyone at St. Paul UMC cares about and is concerned for the welfare of the children, Dr. Green said, and the congregation has rallied generously to provide resources so the orphanages can maintain their basic daily operations.

“Ukraine is something that draws us all together. They’re ours.”

Borrowing a phrase a former church member said about being involved in missions, Dr. Green said, “Ukraine has grabbed hold of the hearts of the people of St. Paul and will not let go.”

The crisis in Ukraine is ongoing. To join St. Paul UMC in its efforts to help Ukrainian children and orphans, visit their Facebook page for regular updates, more information, and how to give.