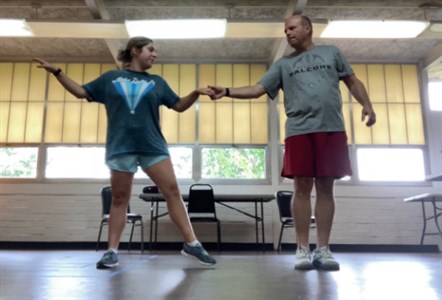 Dr. Scott Hagan is a pro at dancing through tough theological issues, but on Nov. 18 and Nov. 21 he’s going to put his actual dance moves to the test as he struts his stuff on stage in front of hundreds of Statesboro friends and family.

Dr. Hagan, senior pastor of Statesboro First United Methodist Church, and his dance partner, Eastyn Durrence, a Georgia Southern University student and former competitive dancer, are one of 10 teams in this year’s Dancing with the Statesboro Stars competition.

A self-described “average dancer,” Dr. Hagan and Durrence will perform a group dance and an individual dance – a mix of hip hop, jazz, and the quickstep – during the two shows.

Before this summer, Dr. Hagan’s dance experience was negligible: a six-week introduction to ballroom dance during fifth-grade P.E. class and, 15 years later, a Latin ballroom dance class with then fiancé and now-wife, Julie.

“I’m just a really average dancer,” said Dr. Hagan, who is quick to give Durrence credit for what dance skills he does have. “It’s so unnatural for me. But Eastyn is a rock star. She’s a great teacher and she’s patient and goes over the steps again and again.”

But dancing is only part of the program.

While Dancing with the Statesboro Stars is an amateur dance competition that pairs local stars with local professionals to compete for best dancer of the night, it’s also about raising money – hopefully a lot of it. Dancing with the Statesboro Stars is the annual fundraising event for Safe Haven of Statesboro, a domestic violence shelter that offers help to victims and children in Bulloch, Effingham, Jenkins, Screven, Candler, and Washington Counties.

So far, Team Hagan and Durrence’s fundraising efforts have included a golf tournament and a dunk booth. In a few weeks they’ll host a dinner at a local restaurant to raise more money for Safe Haven.

The Statesboro First UMC congregation has long been a supporter of Safe Haven, Dr. Hagan said.

“Like every Methodist church in South Georgia, Statesboro First UMC is known in this community for its commitment to serving others in practical ways,” he said. “This is an opportunity for our church to keep doing that.”

The congregation and community have been incredibly generous, Dr. Hagan said. Fourteen members of Statesboro First UMC have danced in the previous 10 seasons of Dancing with the Statesboro Stars. They’ve supported and encouraged Dr. Hagan and Durrence and have helped guide them through the process.

And even though dancing and fundraising is a lot of work – Dr. Hagan and Durrence estimate they spend between six and eight hours a week practicing and working on projects – the blessings exceed their effort.

“God’s economy is upside down,” Dr. Hagan said. “You think you’re going to give, but you end up getting instead.”

Strong friendships have formed between the 20 dancers and the choreographer, Dr. Hagan and Durrence said. They pray together at the end of every group practice and check in with each other throughout the week.

“These are deep relationships that this opportunity to serve affords us,” Dr. Hagan said. “It’s a great cause, and we come away with a deep sense of community with the folks who are serving.”

Durrence, who also serves as Statesboro First UMC’s assistant director of children’s ministries, says it’s a privilege for the two to represent the church and an opportunity to serve in a different way.

“We’re able to minister to people through this,” said Durrence, who grew up at Statesboro First UMC and has been dancing on and off for 18 years. “It’s just a reminder that what we’re doing is good and people’s lives are going to be changed.”

While dancing is fun and entertaining, it’s really just one more way to put their faith into action, Dr. Hagan said.

“Jesus tells the Church in Acts chapter 1, ‘You are to be my witnesses in your hometown, in your home region, and around the world.’ And I’m convinced that our witness is much more about what we do and where we spend our time than it is what we say,” he said. “This is a fun way to stand for something that a lot of people don’t want to talk about and a lot of people underestimate how many are impacted by it.”