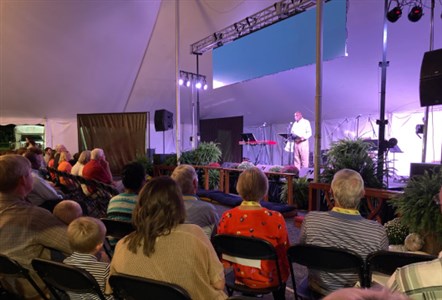 Meeting every Monday evening in an upstairs room at the church – aptly named the Upper Room – they had no plans and no real idea what to do but pray.

“We knew we needed revival. The whole world needs a revival,” said Don Marsh, a member of Statesboro First UMC who served on the church’s evangelism committee. “When we started, we talked about having revival in our church, for our church members. Before that night was over we decided not to put God in a box, not to limit Him. For us, it was and is our intention that our revival be the start of a revival for the whole world.”

Out of their prayers grew an idea to host a revival, and last month, Statesboro First UMC hosted “Revive and Restore,” a three-night event that saw more than 600 people gather under a massive tent in the church’s parking lot.

“It was a work of God through hundreds of lay people,” said senior pastor Dr. Scott Hagan, who called the revival “incredible.”

Bishop James Swanson, resident bishop of the Mississippi Conference, brought his dynamic preaching to the revival, which was held Sunday, Oct. 10; Monday, Oct. 11; and Tuesday, Oct. 12.

It was a diverse, ecumenical gathering, with people from across denominational lines gathering under and spilling out of the tent. Methodists, Baptists, Presbyterians, Primitive Baptists, Episcopalians, Pentecostals, Lutherans, and many who had never attended church showed up to praise Jesus and hear Bishop Swanson proclaim the Word of God.

“People weren’t just there to be entertained, they were there to encounter the Holy Spirit,” Marsh said. “The Holy Spirit showed up because we prayed and expected it.”

“I can’t say enough about the original four members and the humility and the great intention and the great spirit they had from the start,” Dr. Hagan said.

It took months of planning, more than 100 volunteers, and untold hours of prayer to host the revival, but the event was just a spark the Holy Spirit used to start a fire, said revival committee member Linda Hubbard.

“Our prayer for the revival was that these embers, these flickers, will be fanned by the Holy Spirit, because for this to be a true revival, the fire must come from Him.”

Hubbard, who said she’s been praying for revival for years, believes God is moving through Statesboro First UMC and in the community.

“I think God is moving and doing a mighty thing,” she said. “I knew the revival had to start individually. I prayed, ‘Lord, let it start with me.’ We need a revival. We need it to start with us, our churches, our communities. We need to fan the flame.”

The dream – that the revival at Statesboro First UMC would ignite a revival in the community that would spread to the entire country and world – is ongoing, Marsh said. One event is not enough, but it’s a spark that will light a fire.

Now that the tent has been torn down and the chairs have been put away, what’s next? The revival was just the beginning, said Dr. Hagan, Marsh, and Hubbard.