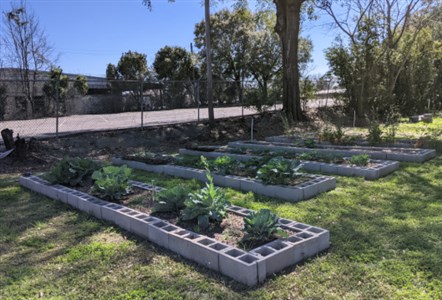 Where an empty, abandoned house once stood now grows a lush, vibrant garden, full of life.

Sitting in the heart of downtown Thomasville, Thomasville First United Methodist Church’s neighbors are businesses, other churches, and restaurants. With only convenience stores and dollar stores nearby, it’s in what some would call a “food desert.”

“For people living near the church, there might not be super easy access to fresh produce,” said Drew West, Thomasville First UMC’s director of youth and Christian outreach.

That’s why, after returning home with an idea from a 2019 mission trip to Nashville, Tenn., West and other church members decided to turn the small plot of land into a garden.

Called the “Giving Garden,” the idea behind Thomasville First UMC’s garden is to give away what’s grown via a weekly pay-what-you-can market. Those who aren’t able to pay aren’t turned away, West said. Other produce is regularly donated to Rescue Mission Ministries, a local ministry that serves meals to those experiencing food insecurity and homelessness.

While it’s a fun hobby, the garden is much more than that, West said.

“We’ve tried to look at what we have and how those things can be used to bless other people,” he said. “I think, so often, it’s easier to see the challenges and the things we don’t have, especially when it comes to ministry, but we can look at the resources we already have and how to maximize those.”

While the lot wasn’t exactly fertile farmland, it was convenient to the church and available. By building raised beds, bringing in truckloads of good soil, installing an irrigation system, and conducting regular soil testing, the garden has produced abundant harvests. Since really ramping up last summer, volunteers have grown okra, yellow squash, and cucumbers in the summer and collards, kale, and garlic in the fall and winter.

A love of gardening initially drew church member Jason Prothro to volunteer his time to the Giving Garden. He also appreciates that the garden beautifies the area while giving back to the community.

“To me, it’s really using what God gave us: the soil, the rain, all of His creation and what He gave us to contribute to the community to be able to give people a fresh, healthy choice of food,” he said.

The Giving Garden isn’t just about fresh food. West says the congregation hopes the garden helps it develop deeper relationships with those who live and work in the community.

“We’ve always wanted it to be a way into the community that’s closest to our church, getting to know people through the markets and such,” West said. “Our goal is to really get to know the folks around our church and build relationships and bless them.”

Prothro, one of about a handful of year-round garden volunteers, helps tend the garden and keep it maintained. A lifelong gardening enthusiast turned agricultural researcher, he has a few tips for any congregation interested in starting its own garden.

“You can almost make anywhere that has sunlight a garden with raised beds. We’ve made that work for us,” he said. “The site we’re on used to have a house on it. It’s not that great for gardens. The soil is hard. But we’ve made it work with raised beds and soil, and it’s been successful. So, don’t let the site scare you away; you can make it work. Have fun with it and enjoy it.”